The relationship between the Japanese and pottery dates back to the Jomon period where it was used for necessities such as preserving food, cooking, and rituals. Not only did it help build a civilization, it also surpassed conventional uses and enriched the culture of Japan in many ways.

Of all the ancient pottery sites of Japan, the "Six Ancient Kilns" (pronounced “nihon rokkoyo” in Japanese) refers collectively to the six representative production areas (Echizen, Seto, Tokoname, Shigaraki, Tamba, Bizen) whose pottery production has continued from the Middle Ages to the present day.

They were named by renowned ceramics scholar, Fujio Koyama around 1948 and were certified as official Japanese Heritage sites in spring 2017.
To mark this occasion, the six cities created a Japanese Heritage Promotion Council with the view of revisiting the technology and cultures that where born in each of these production areas over the last thousand years. It will be an opportunity to delve into the wonders of the Six Ancient Kilns from a new perspective.

Spring of 2018 marked the beginning of “Journey. One thousand years. The Six Ancient Kilns”, a project instated to re-examine fundamental human behavior, the relationship between nature and humanity, and the the roots of making and creativity, through the lens of pottery.
The hope is to examine “the intersection of fire and humanity, soil and humanity, water and humanity” which each of the six areas has cultivated over the last 1000 years, and to inspire us to imagine a future, 1000 years from today. 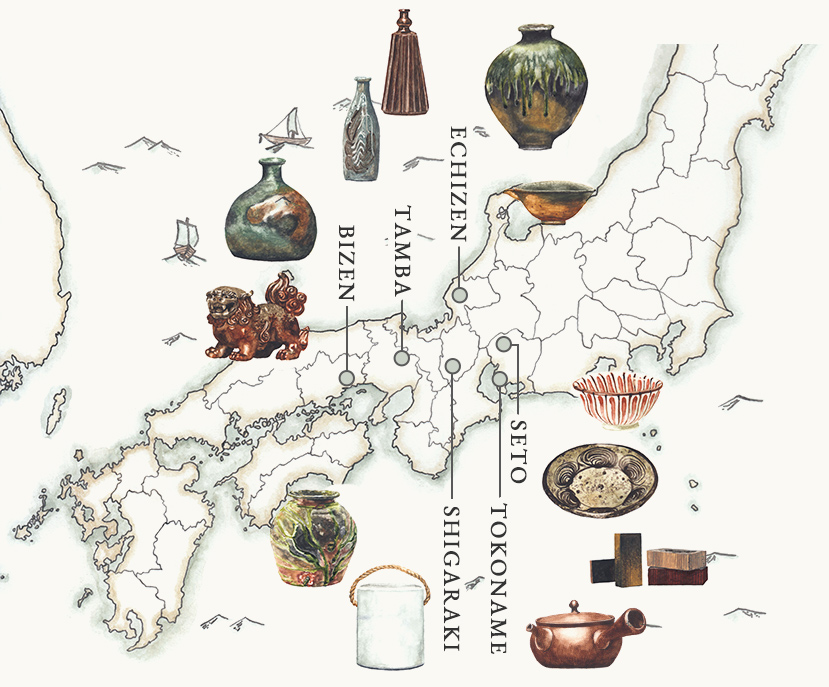 Among the Six Ancient Kilns, Echizen is the only production area that faces the Sea of Japan and complements the climate of the Hokuriku region of Honshu (including. Niigata, Toyama, Ishikawa and Fukui). Although originally called Kumaga yaki or Oda Yaki, ceramics scholar Fujio Koyama renamed the region's pottery as Echizen ware in 1947. It draws influences from Tokoname ware, which also has an ash glaze leaving a rustic impression. The soil used to created the Echizen ware contains a high amount of iron and can withstand high temperatures. When fired, it appears to be red in color. A representative product would be the Echizen red tile, which, thanks to its ability to withstand cold weather, has been used in places such as the Fukui castle ruins and the Kanazawa castle trace, and is widely distributed around the coastal areas of the Echizen Northern Sea.

Seto City has been an important fixture in Japanese pottery and culture, as is proven by the fact that the common word for ceramics in Japanese is "setomono". It is said that Seto ware was started by Kato Shirozaemon Kagemasa, who learned pottery techniques in China during the Kamakura period (1185–1333) and started a kiln in Seto. However, there are earier remnants of kilns from the Heian period. Among the Six Ancient Kilns, dating from the late Heian era to the Muromachi era, Seto City is the only area to produce glazed pottery known as "koseto". Pottery production began in and around the late Edo period(Edo period:1603-1867) and various kinds of pottery was produced, establishing Seto as one of the leading areas producing ceramics in Japan.

Tokoname was the largest production area of the Six Ancient Kilns. Products from its kilns were transported across Japan from the Tohoku region in the far north to the Kyushu region in the far south, via its sea routes. Much like the Seto kilns, Tokoname kilns originated from the Sanage kilns. Yet Tokoname ware differs from Seto ware. Largescale pots and jugs are produced through a method called "yakishime" whereby items remain unglazed, and a method called "yoriko zukuri" in which the potter creates the shape by rotating himself instead of using a potter's wheel. Due to the spread of railroads and sewer systems in the Meiji era(1868-1912), there was a high demand for clay pipes, which were made using wooden molds. From the Edo period(1603-1867), an unglazed red Chinese imitation teapot was widely produced and continues to be a representative product from this area.

Shigaraki is located in the southern part of Lake Biwa, surrounded by mountains, rich in raw materials. It has also been historically known as a transportation hub since ancient times. Shigaraki ware is unglazed and fired at a high temperature (referred to as "yakishime"). Like Bizen ware, it offers a rich variety of expressions. The area drew influences from Tokoname ware and produced large pots and jugs from the 13th century. In the 15th century, everyday items such as unglazed mortars, pots, and jugs were produced. In the Azuchi-Momoyama period(1573-1603) tea bowls were created, and in the 19th century, teapots and hibachi (a Japanese heating device using charcoal as fuel) were made. From the mid-1940's, a variety of products such as tiles and architectural materials were produced.

Surrounded by mountains and within close proximity to Kyoto and Osaka, Tambasasayama is still a thriving pottery-making area. Tamba ware began production in the late Heian period(Heian period:794-1185) and used the same kiln construction and pottery making processes as Tokoname ware and Echizen ware. When fired, a natural glaze formed from ash would coincidentally create a beautiful finish. During the Middle Ages, Tamba ware products were often pots, urns, and mortars, while in the early Edo period(Edo period:1603-1867) there was a shift towards using the “noborigama” (climbing kiln), "yuyaku" (glazes) made out of ash and iron, as well as the “rokuro” (pottery wheel). In the latter half of the Edo period, a signature vessel called “Shiro Tamba” was created using white soil. Always aligned with the demands of the times, flexible and innovative Tamba potters created products that were relevant and very much rooted in the lives of the ages.

As Setouchi City's production of Sueki (also known as Sue pottery), which began in the 6th Century, came to an end during the latter half of the Heian period(Heian period:794-1185) Bizen ware came about from the Inbe area, almost as a direct respose. In the latter half of the Middle Ages, there was popular demand in Bizen ware, especially in products such as earthenware mortars. In the Azuchi-Momoyama period(1573-1603) tea enthusiasts admired the simple yet rustic characteristics of Bizen ware. The unique texture and variation in color that was created by not using a glaze garnered many enthusiasts, and still continues to inspire fans today.

This website is created as a part of the “Journey. One thousand years. The Six Ancient Kilns" project.