Area: 258.14km²
Total Population: 35,213 ※As of January 2018
Climate: Average temperature 14.6℃, precipitation 1,469mm ※based on data from 2015
Local specialities: Pottery industry, Bizen curry, figs, grilled anago (salt-water eel),
muscat grapes, oyster okonomiyaki (cabbage based savory pancake), oyster
Origins: In 1951(Showa 26), two towns, Inbe and Katakami, merged and became Bizen City.
Since then the Mitsuishi and Katakami districts were one of
the leading production areas for refractory bricks throughout the country.
Tourists also know Bizen for Shizutani School, one of the oldest public schools in the world,
as well as the Kainoki trees (Chinese pistache),
which bring crowds of tourists to the city in for leaf peeping in the fall . Introduction Video

Located in the southeastern part of Okayama and facing the Seto Inland Sea, Bizen’s climate is mild and moderate. The area is known for its great access, being located at the intersection of one of the three major rivers in Okayama, the Yoshii River, and the Sanyo Road, which runs from Yamaguchi to the Kinai area (areas close to Kyoto). Bizen ware first began with the creation of bowls, plates, and tiles in Kumayama at the end of the Heian period(Heian period:794-1185). In addition, the western part of Bizen, the Inbe area, is surrounded by the Furo, Io, and Kayaharayama mountains, which are made up of rhyolite volcanic rock and contain a rich variety of soil called “hiyose”. Hiyose was widely used in Bizen ware, which is one of the reasons behind pottery production in the area.

Early Bizen ware was fired in the peaks of the Kumayama Mountains, but as the popularity of Bizen ware grew and the kilns grew larger, the kilns were moved down into the villages for convenience and for transportation purposes. During the Azuchi-Momoyama period(1573-1603), it is believed that the potters who trained in Bizen began to guide pottery making in Kaga, Toyooka, Tamba Sasayama, Maizuru, and Yanai, as products imitating the form of Bizen ware appeared on the market. From this, it is evident that Bizen ware had established itself as a distinct aesthetic brand. In the Edo era(1603-1867), Mitsumasa Ikeda, the feudal lord of Okayama, made intensive efforts to develop Bizen ware. He offered fuel and materials to potters and designated skilled potters as "Master Craftsmen". It is said that the first multi-chambered climbing kiln was opened in 1831 in Bizen, and, with repeated renovations, the kiln continued to be used until around 1940/1941. 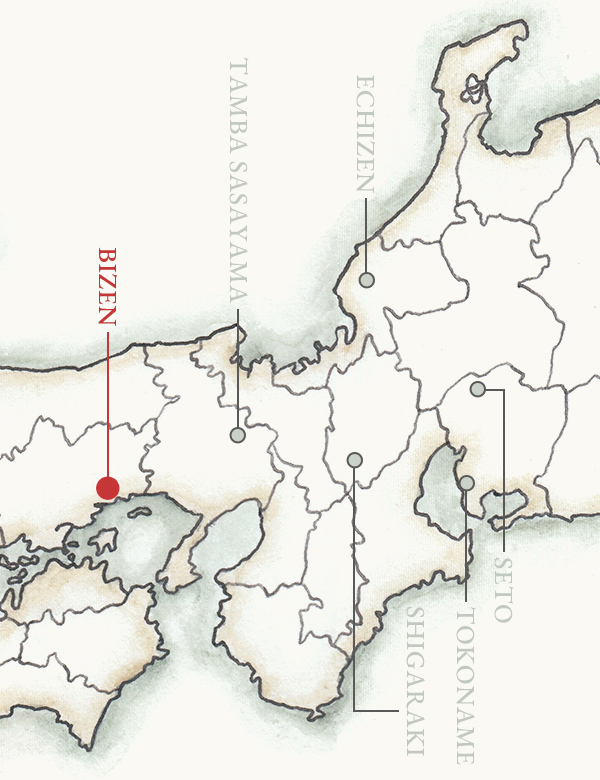 Bizen ware's characteristics can be found its unpainted and unglazed finish. The work represents the raw quality and landscape of the materials of when it was fired. As the pottery is fired for about two weeks at a high temperature of 1200 °C or more, it has more strength compared to other pottery. There are also fine irregularities and bubbles on its surface, which is said to make sake taste delicious and smooth. The pottery uses a rich soil called "Hiyose" which can be found in the Inbe area in Bizen City. It is sticky, contains a high amount of iron, and has low fire resistance. This soil is then mixed with the black soil from Osafune in Setouchi City. The tradition of using an ascending kiln to fire and the pine wood for fuel continues today, and as each piece is molded one by one, colors differ from one to the other and can be found in a rich variety of textures such as Goma, Sangiri, Hidasuki and Botamochi etc.

In Bizen City, two-thirds of the total area of the city is mountainous. Its geology is composed of rhyolite and quartz porphyry. In comparison to areas rich in granite, the area is characterized by the quick regeneration of trees and the growth of fuel sources such as red pine trees. In addition, the mountain clay generated from the rhyolite as well as the rice field deposits from the plains became raw materials for Bizen ware, giving it a unique characteristic. It is said that these rich forest resources and clay are what have continuously supported Bizen ware production since the Middle Ages. 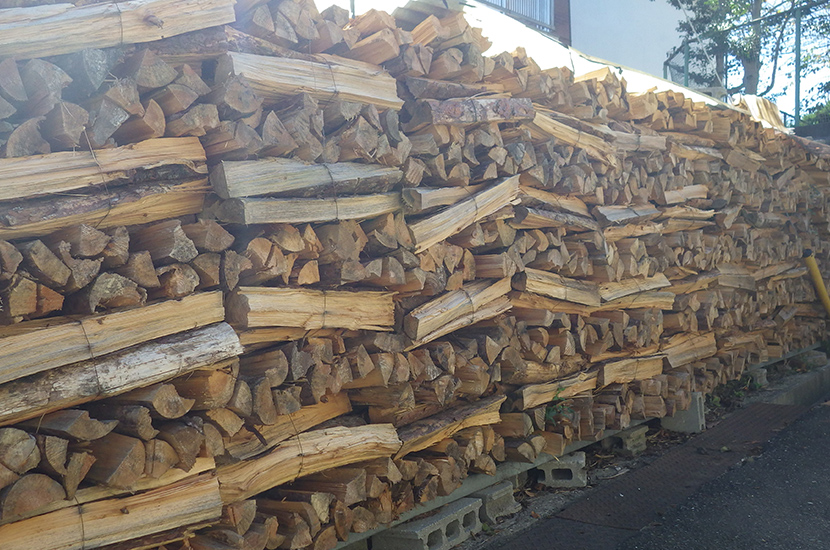 For the land was rich in water

One reason why Bizen ware was able to produce such extensive amounts of large-scale pottery was because they were blessed with a great location. In the first half of the Middle Ages, the Yoshii River (one of the three large rivers in Okayama) was used to transport finished products. From the latter half of the Middle Ages to the early modern era, pottery was transported using a route from Katakami Bay to the Seto Inland Sea. "Inbe Minami Ogama", an important kiln during the Edo period(1603-1867), was located only 1.5 kilometers away from Katakami Bay, a great location in close proximity to the Furo River. Its location and accessibility to means of transportation was and still is a strong reason behind Bizen ware's success. 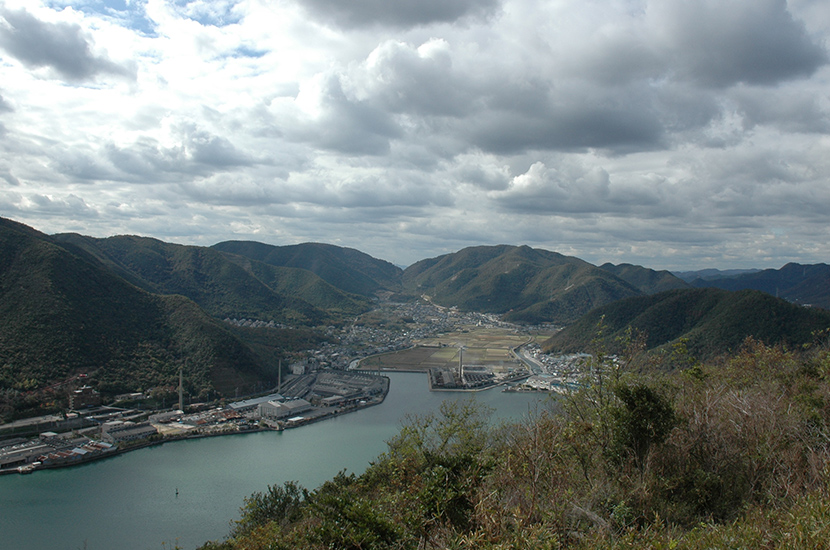 For features and uses were adapted according to changing times

Bizen ware has a history of meeting the needs of its times. For example, the large pots and mortars that were created in the late medieval period had outstanding functionality as tools, such as for storing liquids, or powdering foods. In early modern times, Miyajishi figurines (shrine guardian lions), Hotei figurines(a god with a potbelly who is one of the Seven Gods of Good Luck) and Ebisu figurines (god of fishing and commerce). In modern times, Kaneshige Toyo successfully revived wares of the Momoyama era and they were used as popular furnishings. During Japan's economic bubble years, Bizen ware was cherished as a mark of prestige. Bizen ware has not always enjoyed prosperity, it has experienced its share of highs and lows. 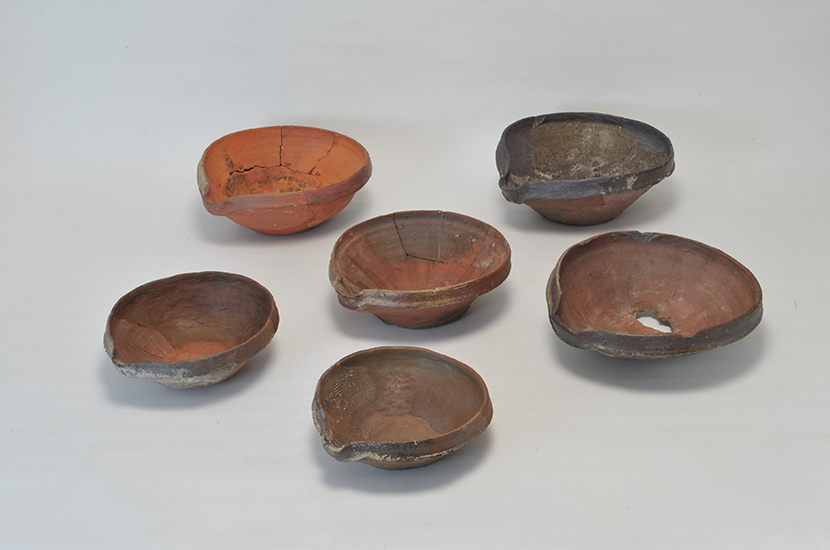 The history of Bizen ware

Bizen ware began its production in the area as if in response to the demise of the Oku Old Kiln Site Group, the largest sue ware (sue pottery: unglazed pottery) production area in Western Japan. In the Middle Ages, a solid mortar was made common in western Japan, and by the time Hideyoshi came to power, a pale, unglazed style became the preference, and was often used in tea ceremonies. To this day, there are pottery enthusiasts that prefer this unglazed finish.

The beginning of Bizen ware

It is said that the start of Bizen ware can be traced back to the production of bowls, dishes, and roof tiles with a kiln(a total length of around 10m) in the mountain plains of Inbe during the Heian period. When the kilns were first established, influences of sue ware were still prominent and much of the pottery was white and charcoal-gray in color. 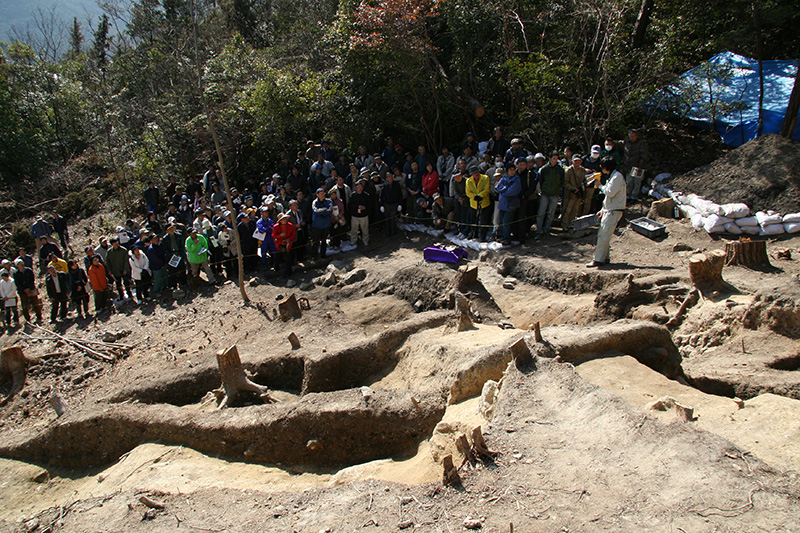 The remnants of kilns under excavation

In the mid-Kamakura period, Bizen ware became established and gradually, its reddish brown pottery was produced. It is from around this time that the kilns were adjusted and upsized for mass production. The scale of the kilns expanded from 10 meters to 20-30 meters. There is evidence from the excavation site that the kiln floors were adjusted many times to expand their sizes. Amongst these kilns, some were built in places that were 400 meters above sea level. 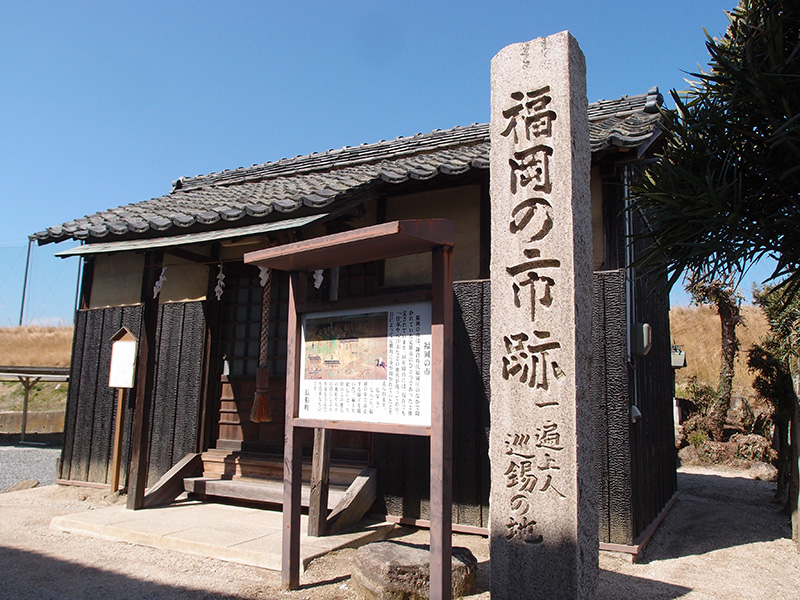 The remnants of a market that opened up at Fukuoka Osafune town in Okayama.

The kilns created were concentrated in three locations at the foot of the mountain, and we know that a large number of mortars were produced in this location. We also know from the excavation of the Furosan Higashiguchi, that the amount of pottery fragments found was up to 1700 boxes for one kiln. Amongst these kilns, one kiln was 40 meters in length and 3.2 to 4 meters in width. It has also been confirmed that there were pillars created to support the ceiling, which would have been needed for a kiln of this size. 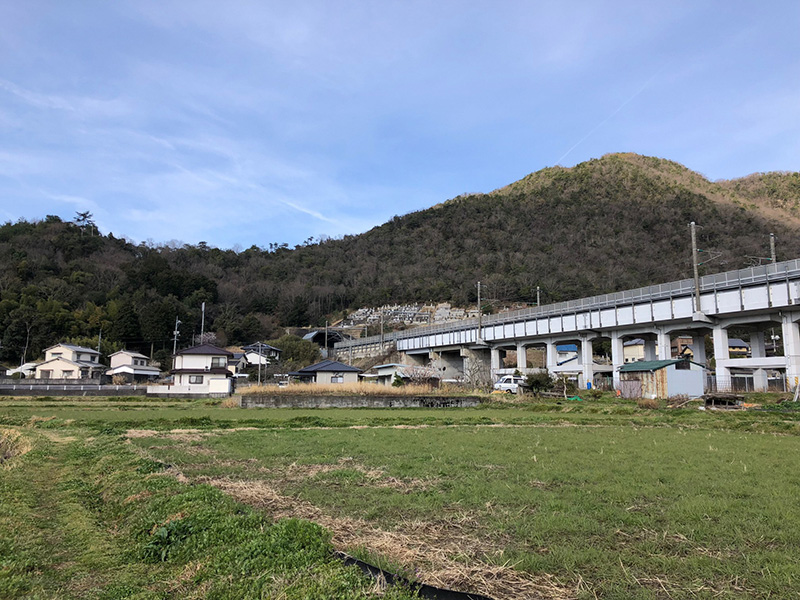 Furosan Higashiguchi remnants of kilns, where a huge number of mortar fragments were excavated.

The Three Large Kilns established in the South, North, and West

Bizen ware was used most extensively during the Muromachi period. The kilns that were originally located in the mountains gradually descended into the plains, and a small number of large kilns were gradually shared, eventually leading to the construction of the Three Large Kilns.

From the various ruins found in western Japan, especially in mountain castles, a large amount of Bizen ware have been excavated proving that pottery from these kilns was widely distributed.

Furthermore, Bizen ware was so strong that it was said that it would not break even if dropped. Not only was it popular for daily use due to its sturdiness, but it was also made popular by tea ceremonies. Juko Murata found its simplicity representative of the spirit of the tea ceremony. However, when white porcelain and glazed pottery entered as an option, its popularity gradually declined. 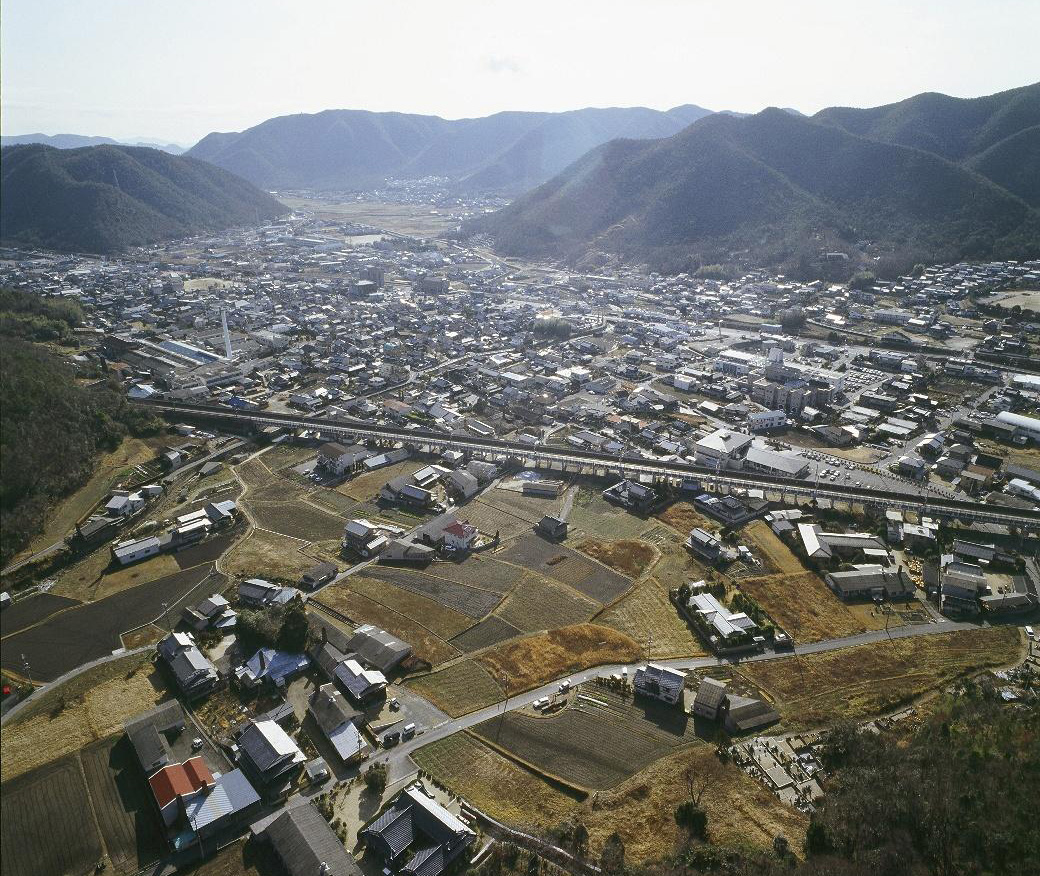 During this period, Bizen ware appeared in many tea ceremonies. In addition to mortars, many kinds of custom-made pottery, such as sake bottles, water jugs, boards, and bowls were created. 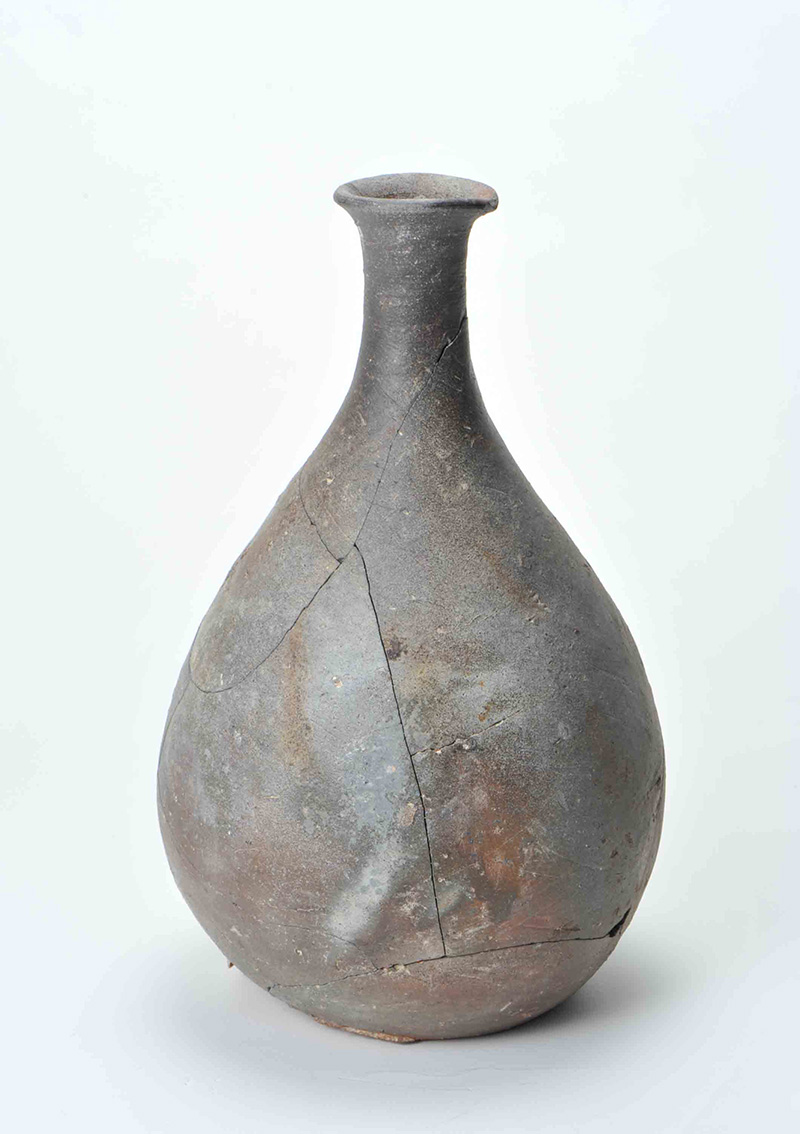 Establishment of a craftsman system

In the Edo period, Mitsumasa Ikeda, the feudal lord of Okayama, made intensive efforts on the development of Bizen ware in his feudal domain. He offered fuel and materials to potters and designated outstanding potters as "Master Craftsmen." Under the watch of the shogunate government, small kilns were combined into large community kilns. The community kilns were operated, managed, and named by six families: Kimura, Mori, Tongu, Terami, Oae, and Kaneshige. Due to community kilns being called "Kamamoto Rokusei" the Edo period is sometimes referred as "The Large Kiln Era." 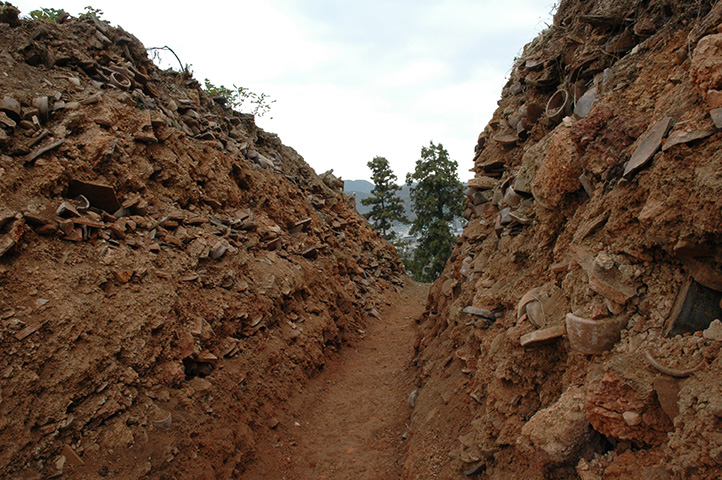 Waste piles from Edo period kilns: an enormous amount of products were fired in giant kilns, leaving piles of "waste" such as shards from failed pots and broken furniture from the kilns over the years.

In 1831(Tenpo 2), three multi-chambered ascending kilns were introduced for the first time in Bizen. These "yuzuukama" were known for their efficiency, and one of the three kilns was repeatedly renewed and used until around 1940/1941(Showa 15/16). A sake bottle called "Ningyo Tokkuri", which was produced in this kiln was used as a sake container for "Houmeishu", a type of sake from Tomo in Fukuyama city in Hiroshima. A multi-chambered kiln made in the Edo period called "Tenpo Kiln" still retains parts of its structure from the Edo period and is a Bizen municipal designated building today. 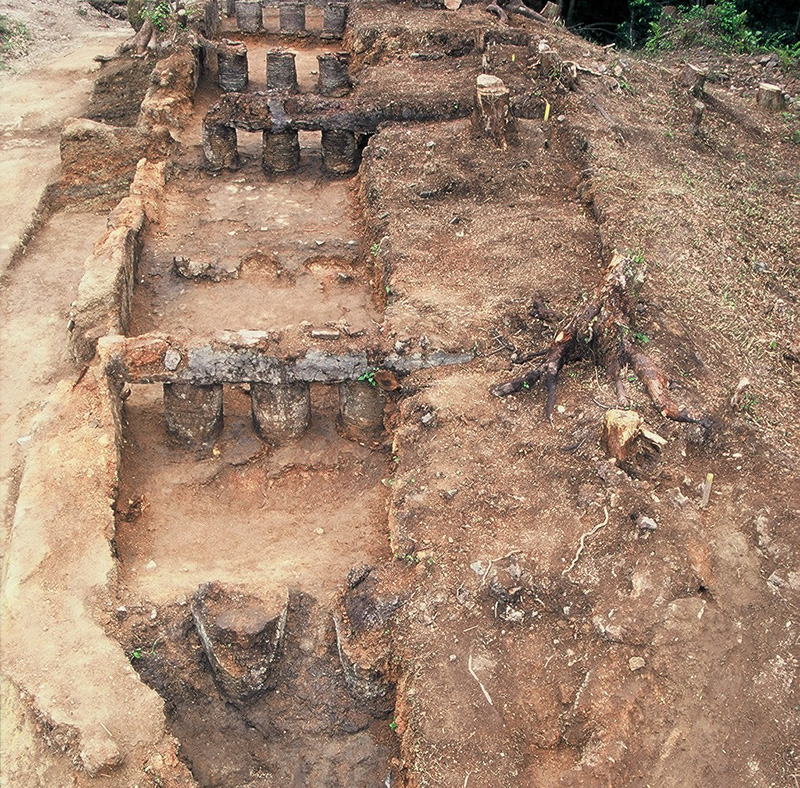 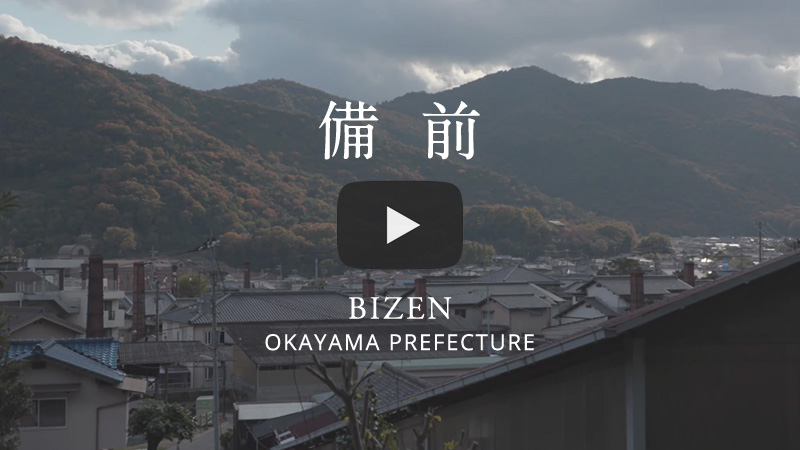 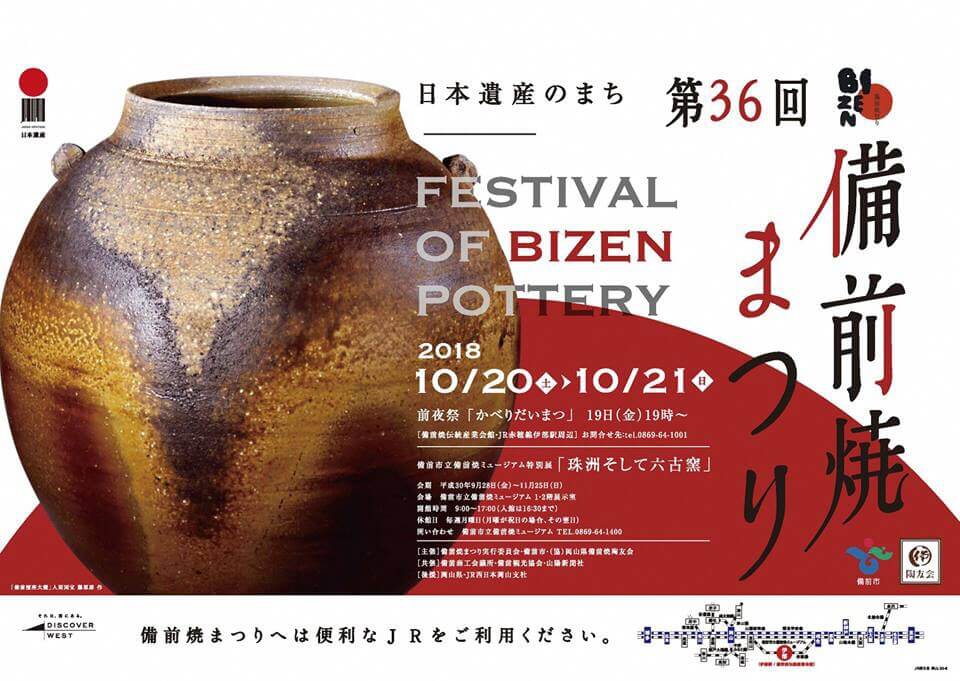 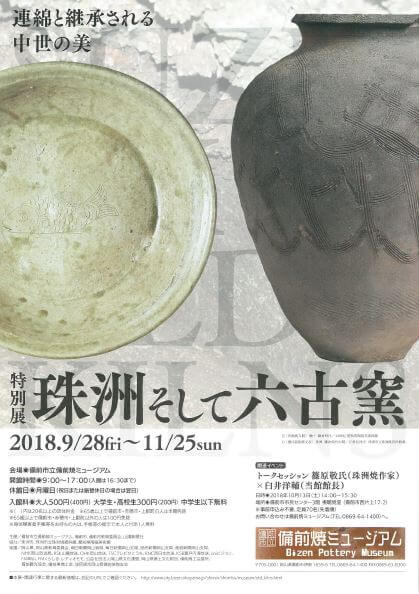 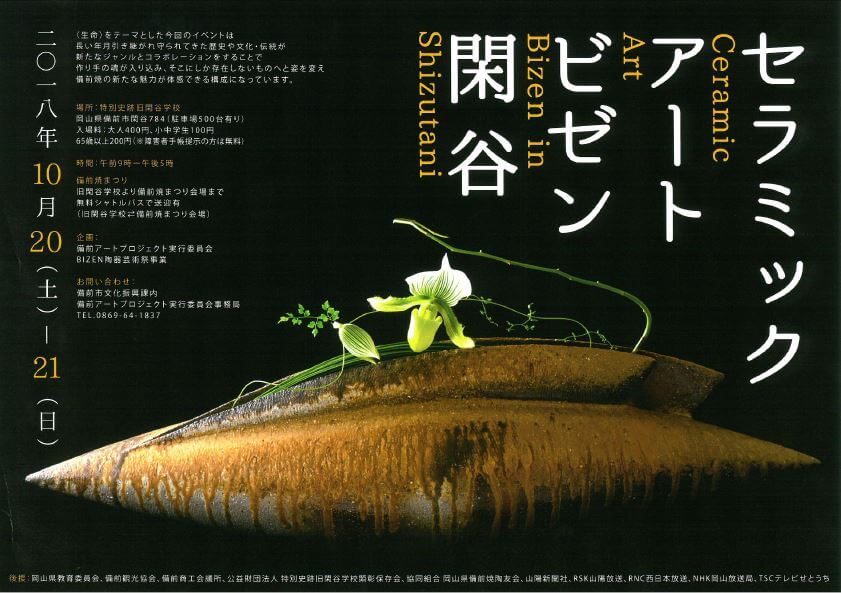