Echizen town is located in the western part of the Reihoku area in Fukui Prefecture. It faces the Sea of Japan and is adjacent to Sabae City, Minami Echizen town, and Fukui City. Most of Echizen town is mountainous, where a range of mountains, which span up to 500 meters, stretch from its coast to its northern regions. The origins of Echizen's pottery dates back to about 1300 years ago, but its beginnings as a production area are traced back to about 850 years ago in the late Heian period( Heian period: 794-1185). More than 200 kiln sites have been discovered so far, and at the time household items such as pots, urns, mortars, sake bottles, and Ohaguro urns were at the center of production. Products produced in and around the Echizen Coast were transported by the Kitamae ships to areas in Hokkaido and Shimane. It became the largest pottery production area in the Hokuriku region. However when the Meiji era(1868-1912) began, there was a time when the demand in Echizen ware declined as running water became available and the demand for porcelain products increased. However, these kilns were later reconstructed thanks to the archaeological research carried out by Mizuno Kyuemon, a local ancient kiln scholar, and Japanese ceramics scholar Fujio Koyama. In 1948(Showa 23), Echizen was designated as one of the Six Ancient Kilns and Echizen ware became known nationwide. In 1986(Showa 61), Echizen ware was recognized and designated as an official traditional craft by the nation. Today it strives to cherish the skills inherited from its long tradition whilst celebrating the creation of new styles by its modern successors. 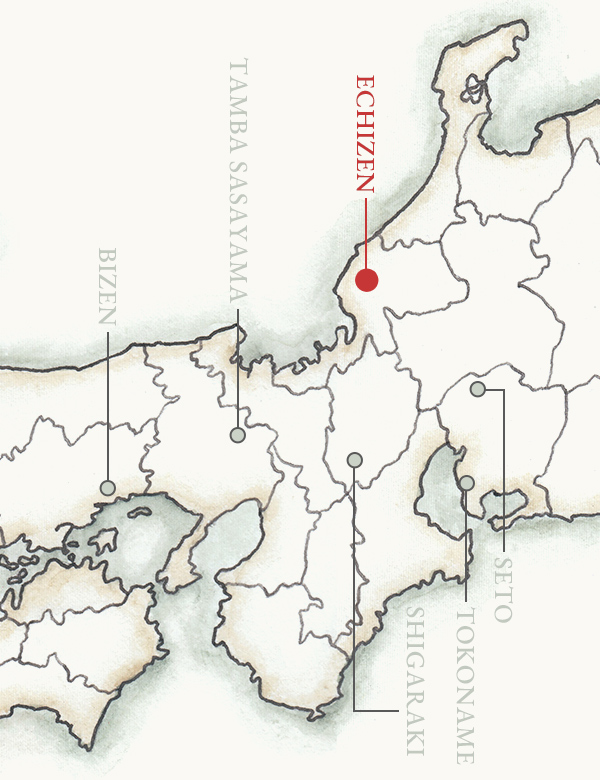 Features a simple and sturdy construction, and is characterized by its simple folk craft-like beauty created by the warmth of its soil and charm of its gray glaze. The soil in Echizen contains iron, giving it a high melting point and therefore making it able to withstand high firing temperatures. As a result its finish has very dense, fine grains and strong tenacity, which allows for delicate molding. Furthermore, due to its high content of glass components such as quartz, which flow in between the soil particles when fired and then solidify, any gaps are filled, resulting in a finish that is hard and dense. As the characteristics of the soil were a good match for making large vases and urns, during the Kamakura period(1185-1333), Echizen’s traditional technique of “nejitate”(twist and stand) was developed and is still practiced today.

Being blessed with high quality materials

Quality clay of a white color clay was mined in the vicinity of Ozowara in Echizen town, where ruins of the first kilns were found. This clay has a high melting point and can handle temperatures up to 1610 to 1650 degrees. It is characterized by its high content of silicic acid and low amounts of aluminum oxide. From the Kamakura period(1185-1333), clay from the western part of the Tenno River was sourced. This clay was even stronger with a higher melting point, making it well suited to creating large pottery pieces such as a large urns and pots. It has been confirmed by official ancient documents that during the Edo period(1603-1867), soil from neighboring areas was used. From this, one can see how materials changed during different time periods. 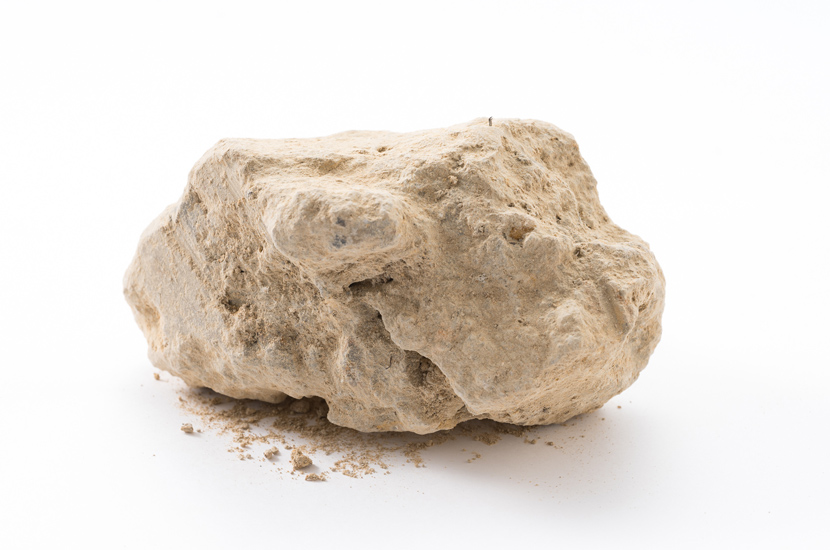 Specialization in the production of specific products

Ever since the Echizen kiln was introduced in the late Heian period(Heian period:794-1185) to the late Muromachi period(Muromachi period:1336-1573), the majority of pottery items produced were household items such as pots, urns, and mortars. Looking at Suzuyaki, a popular pottery originating from the coast of the Sea of Japan until the 15th century, items other than household items such as “kyouzutsu” (tube cases) and bone vessels were made to meet the needs of the times. However, at the end of 16th century, due to the increase of demand for large urns, Suzuyaki faced a durability problem, leading to the decline and subsequent closing of its kilns. Echizen ware, on the other hand, was able to create a reputation for high quality, strong products by narrowing down and focusing on the product lineup offered. 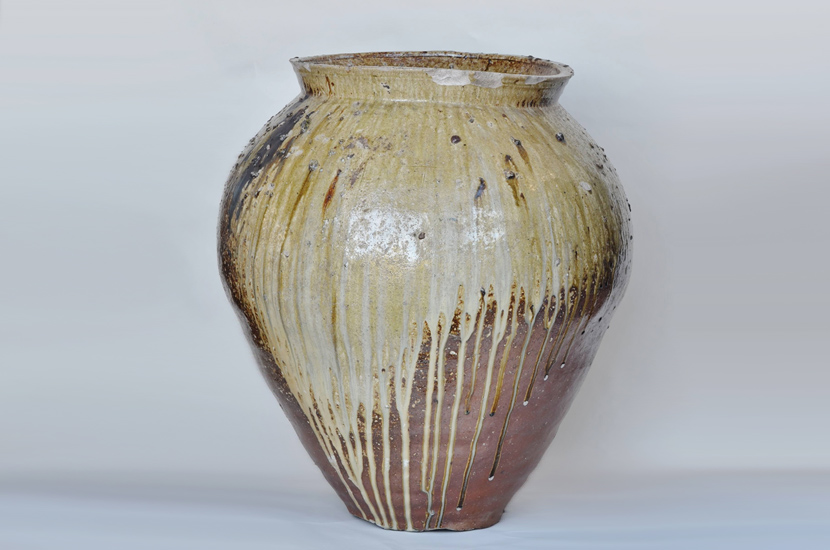 Having one of the Japan's largest port towns

The Echizen ware products were transported to a seaside settlement via river and onshore routes. From there, it was transported to large ports such as Tsuruga and Mikuni by small boats, and eventually traveled across the Sea of Japan on large ships. Tsuruga and Mikuni have been known as representative port towns of the Sea of Japan since ancient times. Tsuruga was especially known as a town that embraced the people, things, technologies (skills), and new ways of thinking that traveled over from Mainland China. Although the "Kitamae ships" built in the Edo period(1603-1867) are most well-known, Echizen’s ports were well established in terms of infrastructure for the gathering and transportation of goods, and this historical background can be said to have allowed the commercial expansion of Echizen ware. 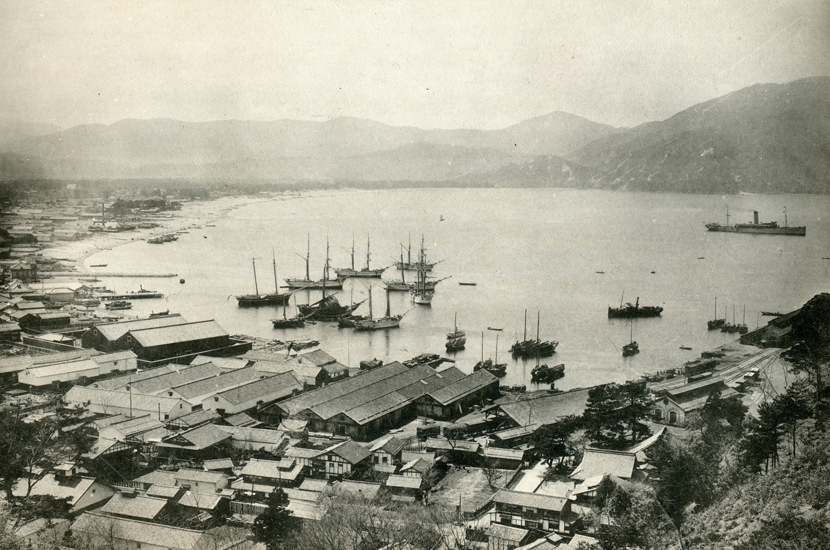 The panoramic view of Tsuruga Port, simply known as “Etsuzan Jyakusui”, referring to the lush greens mountains of Echizen and the clear water of Wakasa Bay
Image credit: Tsuruga Museum

Echizen, which was the center of pottery production in ancient times, started its production in the late Heian period(Heian period:794-1185) under the influence of the Tokoname kilns in the Aichi prefecture. Echizen production was boosted in the Kamakura period to Muromachi era, and due to technological innovations made in the Sengoku period (1467-1568), mass production of the pottery was made possible. Echizen ware was distributed across the coasts of the Sea of Japan, and became one of Japan's representative pottery production areas.

As the place for the largest production of Sueki

The Nara period (Nara period:710-794) marks the period when full-scale Sueki production began in Echizen town, and this continued until the early Heian period (Heian period:794-1185). Approximately 60 kiln sites have been confirmed so far, and Sueki produced at the Nyu kiln site was distributed across Echizen. There is no direct official genealogy between Sueki and Echizen ware, but it is important to know this site in order to understand the history of craft production within the area. The “Shimeitani Sueki Kiln” site in Ozowara, Echizen town, which was built in the 10th century and has subsequently been designated as cultural property by the Fukui prefecture, underwent conservation after its excavation and can be visited. 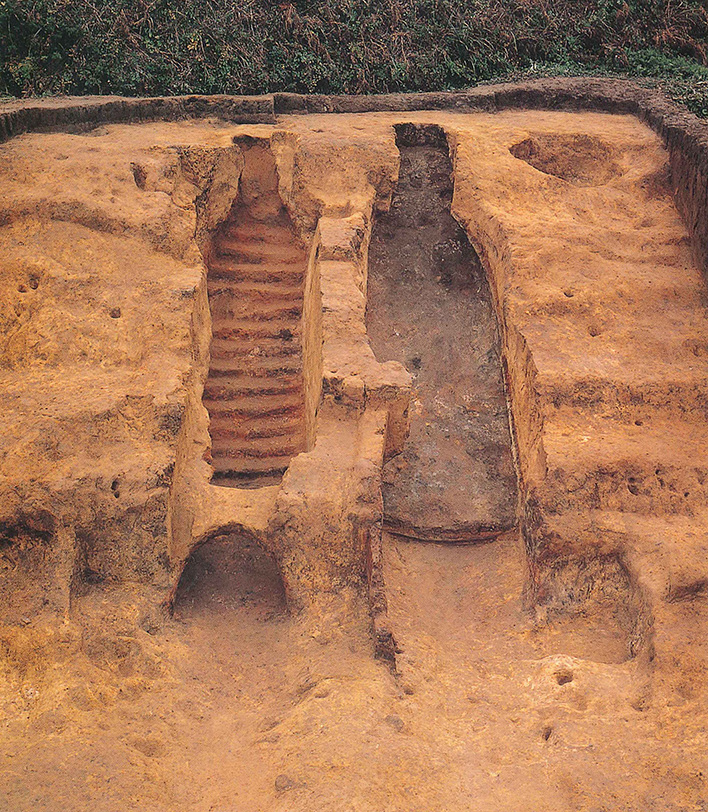 The birth of Echizen ware

In the latter half of the 12th century, Echizen ware was born from the technology and craftsmanship of the Tokoname kilns. The first kilns built in Echizen were operated in the vicinity of the Ozowara area, and the pottery was similar in shape to Tokoname pottery. In Echizen, more than 200 kiln sites have been discovered from the Middle Ages to the modern era. Echizen town’s Ota and Miyazaki district became a major production area for pottery. Among these kilns, the Jochou Sango kiln site is an important site that marks the start of Echizen ware and has therefore been designated as an official Cultural Property site by Echizen town. 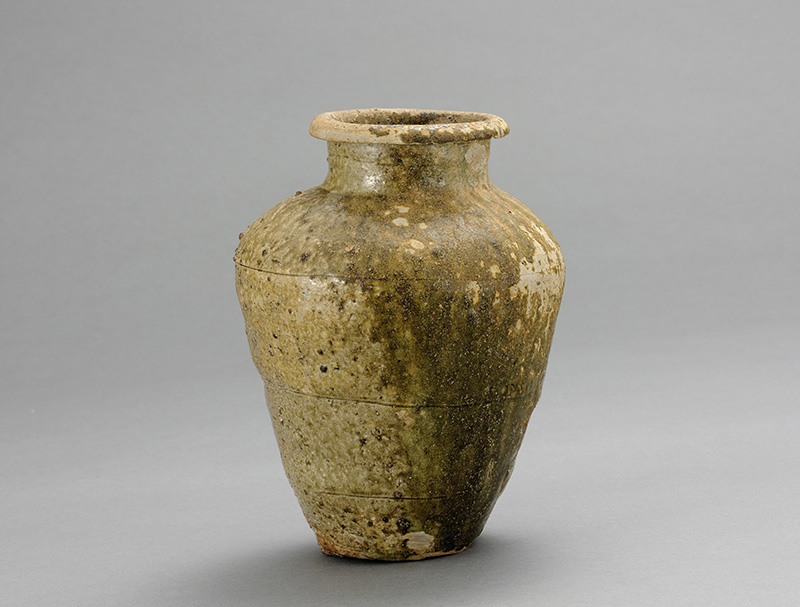 With the building of castle towns during the Sengoku period, the Echizen kilns began mass producing to meet rising demands. The kilns became enormous, and triggering various technological innovations aimed at reinforcing kiln walls and pillars. The production system was also revisited because the previous generation only took on smaller scale production, whereas only large scale mass production was pursued in this period. During the Sengoku period, Echizen ware was distributed across all coastal areas of the Sea of Japan. Amongst these kilns, the size of the Takenotani kiln (Echizen town Designated Cultural Property), which was used in the late 16th century to the early 17th century, is telling of the great amounts of production that was happening at the time, with its enormous kilns measuring some 25 meters in length. 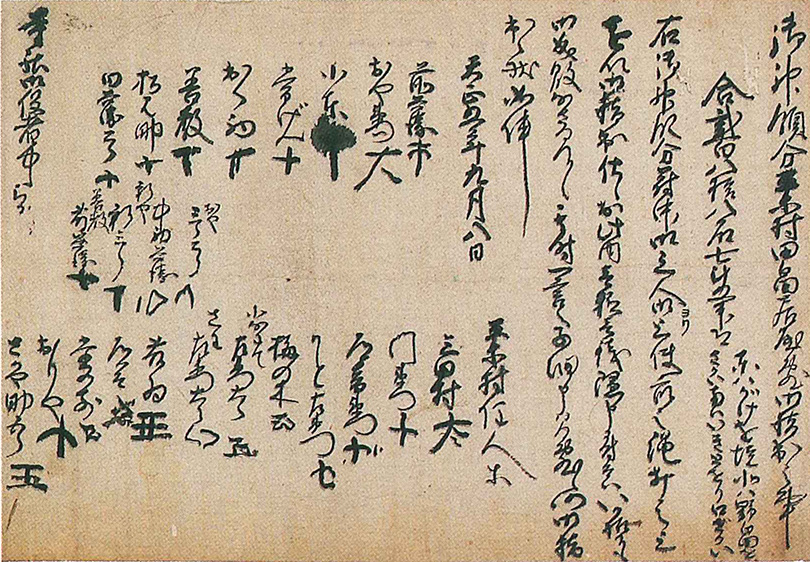 The birth of the Echizen red tile

Production of red tiles began in the mid 17th century. The “Echizen red tile” developed its reddish black color from mixing water with a glaze, and soil that contains iron.
Red tiles identical to those fired in the Echizen area were excavated from sites around Kanazawa castle and Fukui castle. Advancements in technology for such tile production spread to the Tohoku regions of Japan, and the Magistrate's office roof in Hakodate City in Hokkaido used roughly 35,000 Echizen red tiles. 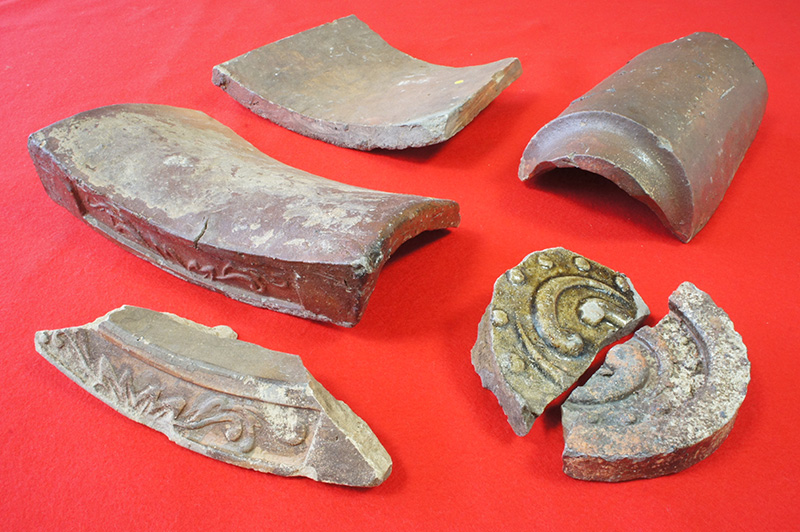 Aiming for the renewal of Echizen ware

As the number of kilns producing Echizen ware declined sharply due to competition from other production areas, new kilns producing a new type of Echizen ware began to setup shop. Some took up the challenge of using local materials to produce porcelain pottery, while others produced high-end pottery with a painted finish. An apprenticeship program aimed at passing on craftsmanship to the next generation was created in hopes of renewing Echizen ware. Skilful potter, Yamauchi Iimon from the Ozowara kiln group was central to the creation of a new type of “white pottery” and was a stakeholder in a joint venture "Nissyouen”, which focused their activity on painted pottery. Yoshida Chojibei who also pursued the production of "white pottery" like Yamauchi, established "Kien", a white porcelain factory. 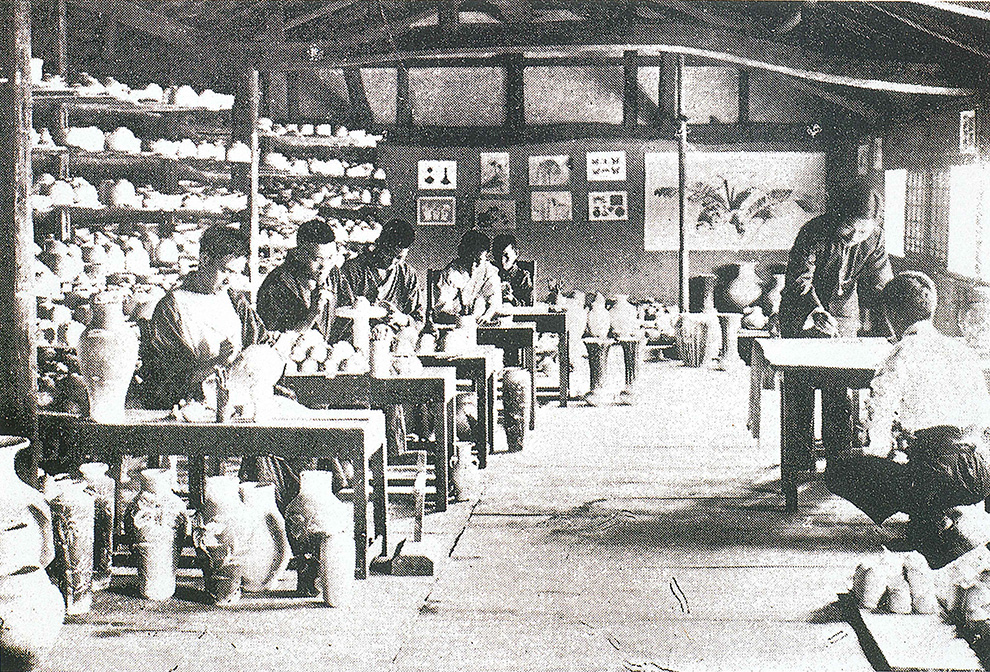 The Naming of "Echizen ware"

For a long time the pottery produced in Echizen didn't have a unified name. Instead the pottery was referred to by its local village name, such as "Ozowara yaki", “Kumadani yaki", “Ota yaki", and “Taira yaki”. In view of this situation, it is said that kiln researcher Mizuno Kyuemon, ceramics researcher Fujio Koyama, and Echizen ware potter Kitano Hichizaemon named all ceramics produced in the Fukui prefecture as "Echizen ware”. By unifying the name of generic ceramics produced in the Fukui prefecture to "Echizen ware" in 1965(Showa 40), the name of Echizen ware spread throughout the country. 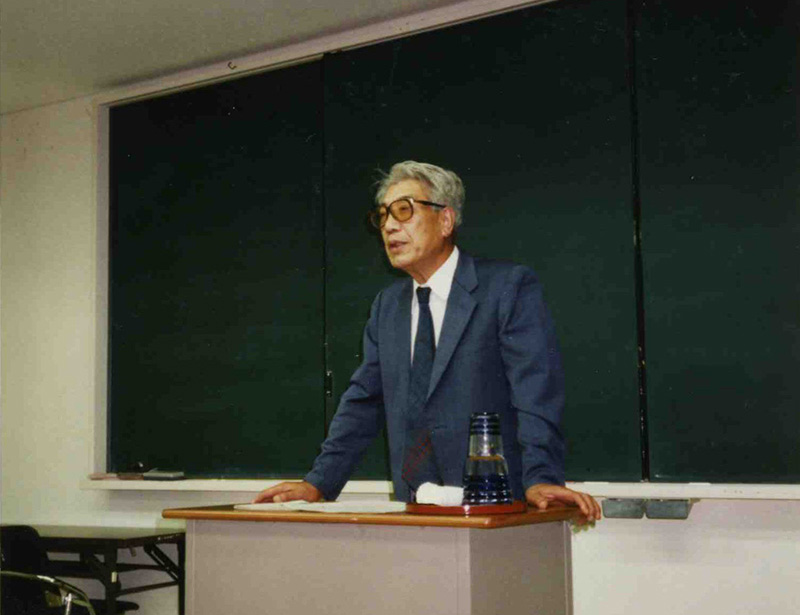 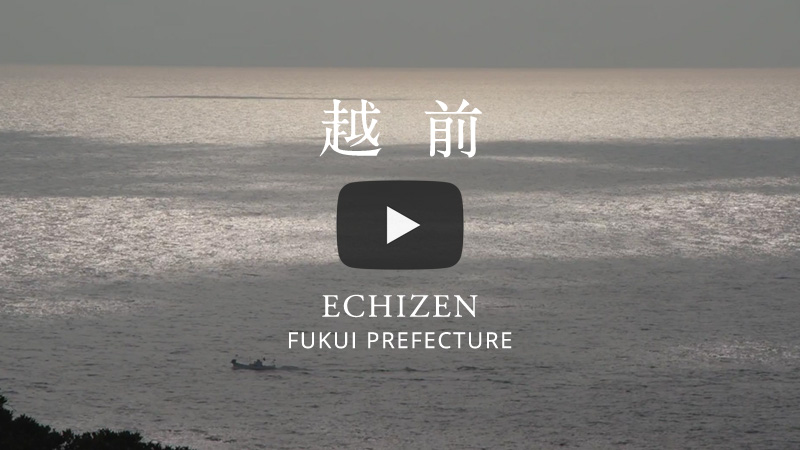 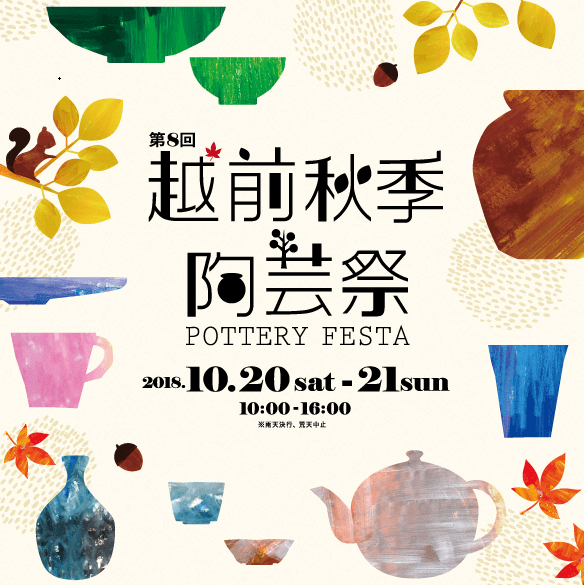 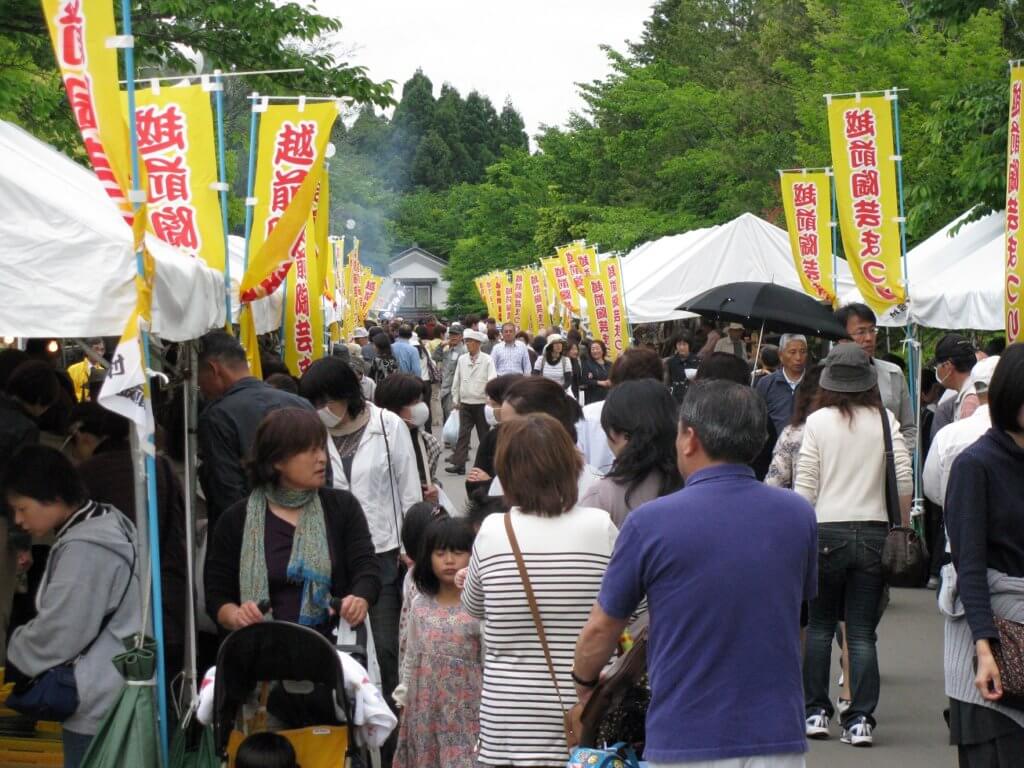 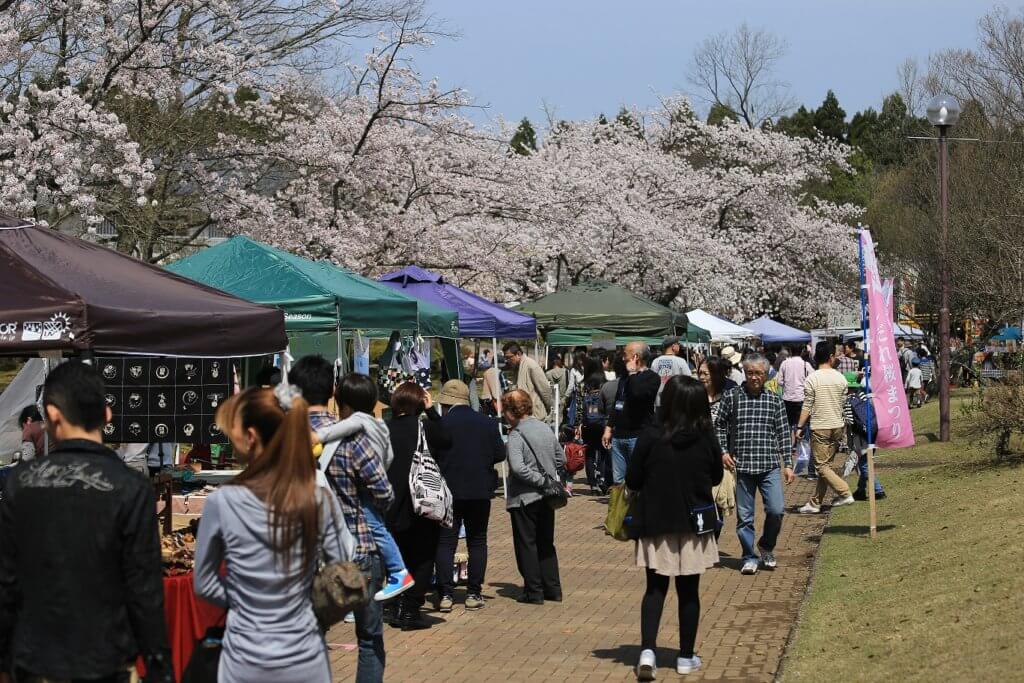