Area: 111.40km²
Total population: 130,047 * As of March 2018
Climate: average temperature 16.4℃, precipitation 1,667.5 mm * 2016 data
Local Specialities: Pottery industry, Akazuyaki (traditional craftwork),
Seto Sometsukeyaki (traditional craftwork and painting onto pottery), Seto novelty,
Insulators, fine ceramics, glass crafts, Seto Yakisoba (Seto fried noodles with sauce),
Gomomeshi (rice cooked together with the side dish), Seto pork
Number of Pottery establishments: 189, Number of people employed: 2,654 * As of 2013
(Number of business establishments in 1978: 1,666. Number of people employed: 14,693).
It’s been said that, as the land passage is narrow, with valleys facing each other back to back,
the area was named "Seto" or "back door”.
It is also said that the word “Sueto” (meaning pottery) turned into “Seto” (in reference to the location).
Seto is surrounded by small mountains with an altitude of 100 to 300 meters, and a moderate climate. Introduction Video

Origins of “Setomono” (translates to “pottery” in Japanese), one of the world's leading production areas

Seto is one of the world's most renowned and rare production areas, which has continuously been producing pottery for almost 1000 years. In Japan, the word "setomono" refers to “pottery”. The term originates from Seto ware, which has been at the forefront of pottery-making throughout Japan's long history of pottery making. The origins of Seto ware come from the Sanage kilns, which were producing sue ware in the latter half of the fifth century in the area which is now know as the Higashiyama Hills of Nagoya. In this hilly area, there was a stratum called the Seto Group, from which it was possible to collect raw materials for pottery, such as high quality kibushi and gairome clay, as well as quartz sand, which is a raw material for glass. The Seto area was abundant in natural resources, such as pine trees, which played an active role in the development of the ceramic industry in the area. At the end of the 12th century, the production of Koseto pottery started. At the time it was the only area in the country known for domestic glazed pottery production, and included the production of items such as shijiko “four ear” pots, bottles, and vessel for replenishing ink stones. In the 19th century, production of porcelain began and exchange with the foreign countries flourished exporting to the United States and exhibiting at international fairs. Due to this, Japan also adopted Western techniques such as the use of cobalt oxide, a pigment used for dyeing, and mold forming methods using plaster. Seto continue to produce a wide variety of products such as tableware, novelty items, porcelain teeth, and car parts, catering to the ever-changing lifestyles of the times. 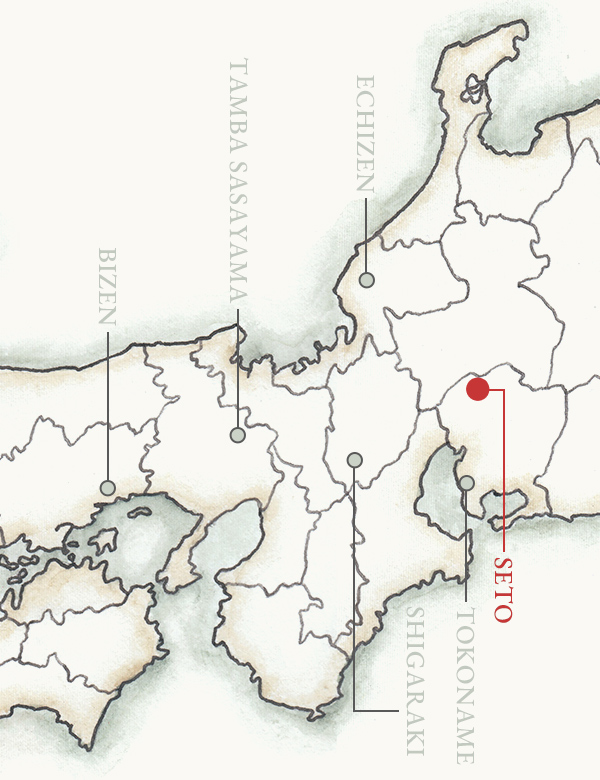 Characterized by a beautiful white unglazed surface, similar to the Chinese celadon and white porcelain. This whiteness is achieved through kibushi and gairome clay, which is collected at local clay mining sites. These clays are strong in fire resistance and rich in plasticity, and since the clay contains almost no iron, they can achieve the whiteness that is seen in this pottery. Using this characteristic to its advatage, a variety of glazed products were created and eventually became an iconic feature of Seto ware. The Seto dyeing method allowed potters to paint these surfaces with cobalt pigment, which would create a blue color on a white background. A layer of transparent glaze was then applied before firing. In more recent years, fine ceramics have been development for manufacturing purposes, applying various technologies to enhance the properties of the pottery.

Blessed with an abundance of high quality clay

The soil around Seto City is composed of sandstone and clay, and is referred to as the "Seto Group”. It has taken up to 2 to 10 million years for this soil to be created. Among the Seto Groups, there are high quality clays that are vital to pottery making called “kibushi” and “gairome”. There is also an abundance of quartz sand, in Seto soil, which is used as material to create glass. The rich soil found in Seto has created a fertile source for the birth and the wide variety of Seto pottery. 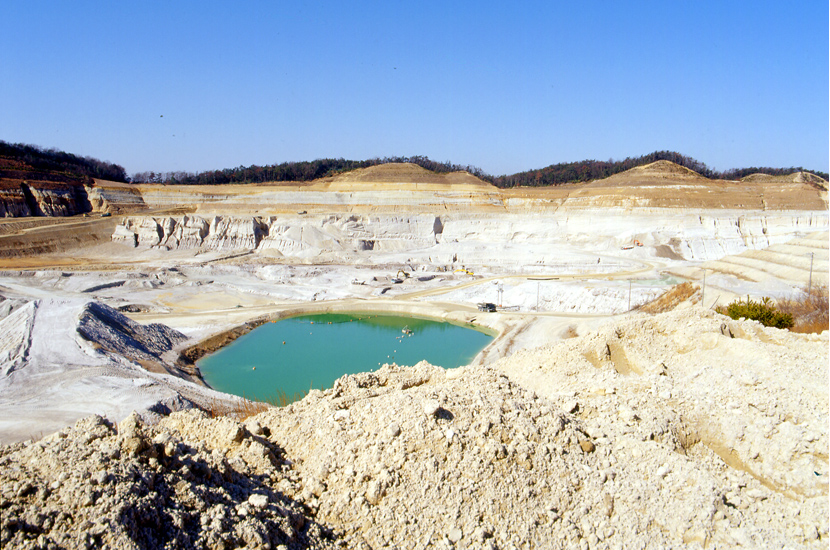 Clay and silica sand mining site (Kami jinya cho, Seto City)
※Photography from 2004. The site has changed since this photo was taken. Note: this mining area is not open to the general public and cannot be visited.

Creating excellent clay that could be adapted for many possibilities

The clay found from the Seto Group has high fire resistance and is soft and easy to mold. This type of clay contains almost no iron content, resulting in a beautiful white finish. Potters were able to paint on this "white canvas" and apply various colored glazes to create a variety of aesthetics. Without this clay, Seto’s pottery would not have existed. 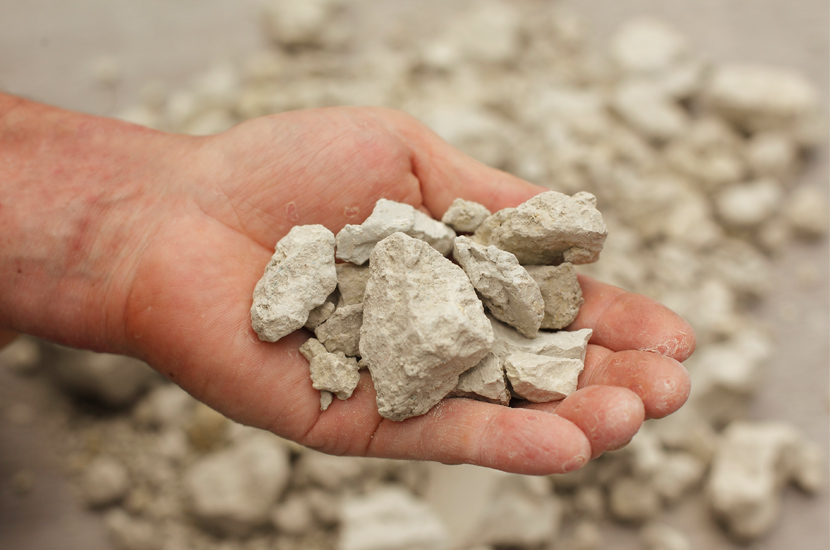 Incorporating and adapting to new technologies and cultures

Seto ware has always adapted to meet the needs of the time and the changing lifestyles of people in a variety of ways. As a result, Seto ware was deeply embeded in the lives of the people of Japan, and the word “setomono” became synonymous with Japanese pottery. Due to the efforts of our highly skilled predecessors to create a variety of products, it is even said that ”There is nothing that Seto cannot make". The products being produced today are not limited to Western and Japanese dishes, but also include various kinds of novelty wares, architectural porcelain, insulators, and fine ceramics. This vibrant and adaptable form of pottery is said to only exist in Seto amongst everywhere else in the world. 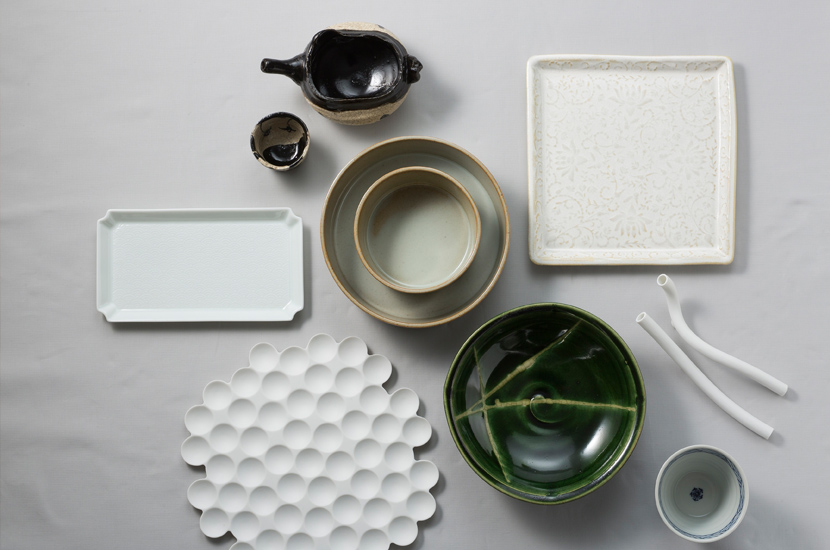 Seto was the only area which produced glazed pottery in the Middle Ages. Porcelain production was made possible by the high quality clay mined from the Seto Group. The pottery created here became so closely tied to the lives of people that Seto ware became synonymous with the word for Japanese pottery itself, which is “setomono”.

In the 10th century, the Sanage kilns spread in areas of the Chita peninsula and Mikawa. In Seto, which was a northern neighboring area, ash glaze pottery began to be produced. Ash glaze pottery was only being produced for neighboring areas at the time. It varied in sizes and shapes, and inlcuded small to large bowls. It has been further recorded that a green glaze was introduced around this time, however, in the mid-eleventh century, mass production progressed and the shapes were simplified to a limited number of products. 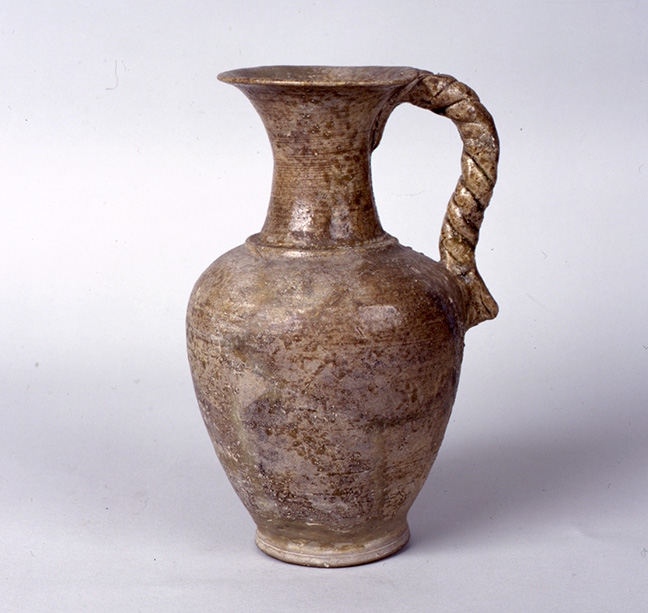 During the 11th century, the Sanage kiln and the pottery area of the Tokai region temporarily abandoned their glazing technique. During this period, an unglazed bowl called “yama chawan”, which translates to "mountain tea bowl”, was produced and distribted to neighboring areas for daily use. Even after the reappearance of glazed pottery in the latter half of the 12th century, they continued to be produced in parallel to glazed pottery, and served as a foundation for the pottery industry in the Kamakura and Muromachi periods. The mountain tea bowl was categorized in two types: finely textured pieces from the Tono region, and coursely textured pieces from the Owari region. 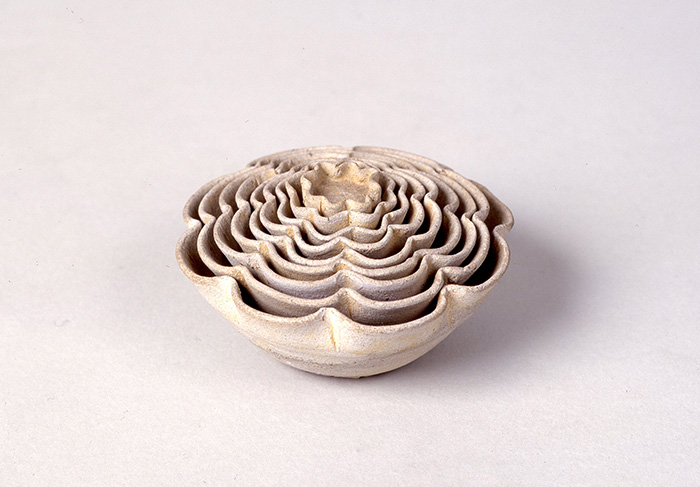 Beginnings of the production of Old Seto pottery

From the early Kamakura period, including the production of mountain bowls, production of new glazed pottery called “Koseto(Old Seto pottery)” flourished. Production centered around creating the shijiko “four ear” pots, bottles, and vessels for replenishing ink stones. The demand for tiles, buddhist memorials, and crane bowls from temples in Kamakura and the Tokai region increased during this period, and many old kilns in the Seto area were used for production. The Sanage Kiln, Chita kiln, Atsumi kiln, In Kosai kiln were able to produce for these unique pottery needs. In particular, the Seto kiln was the only kiln in Japan to not only fire glazed pottery, but also large pots and bottles, as well as Buddha vases and incense burners. 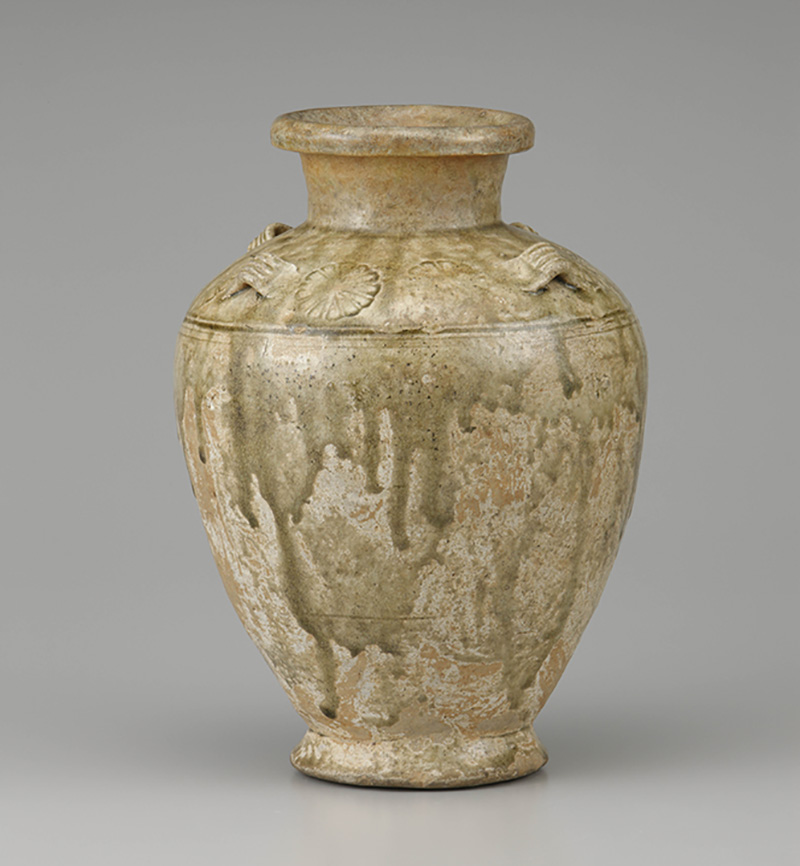 The rise of Old Seto pottery

In the late Kamakura period, pottery pieces that included an iron glaze in addition to an ash glaze were created. Furthermore, a variety of decorative patterns were applied through stamping, adhering, and drawing, resulting in ornate forms of pottery. In the Muromachi period, tools such as bowls and small dishes were diversified, and functional products such as cookware and cooking utensils became the center of production. In addition, as a result of the Ming Dynasty's policy on sea prohibition, there was a decline in the volume of Chinese ceramics that were imported. The production and distribution of daily household items and tools was expanded to cities, harbors, and feudal estates throughout the country. 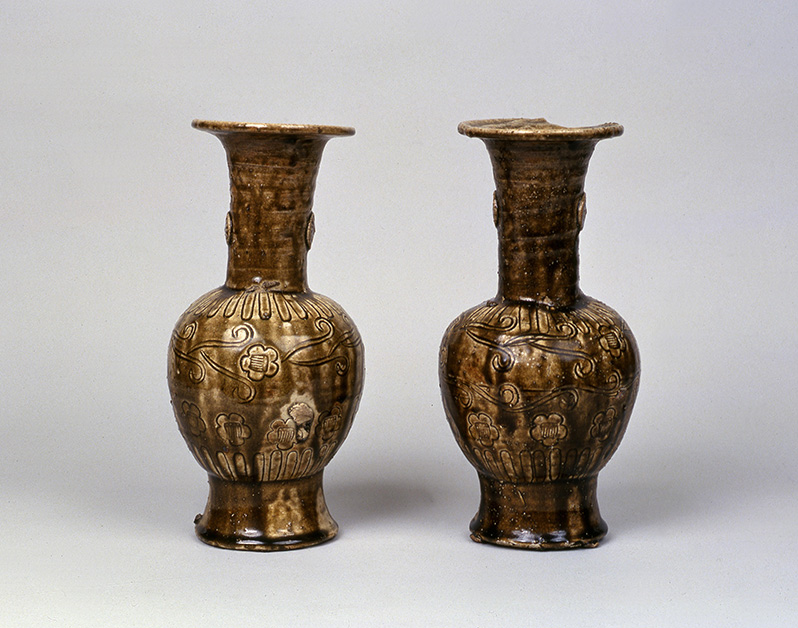 Production of a Variety of Pottery Products

With the development of kilns, the use of traditional tools decreased, new developments such as the Omuro tea bowls and Koshi Sabi tea bowls were seen. In addition, the production characteristics and speciality of each village became clearer during this period. In Seto village, furniture and lighting fixtures, In Akazu Village and Shimo Shinano Village the mortar, storage equipment, and cooking utensils, in Shimohadagawa Village incense burners, and tools and equipment for religious rituals were produced respetively. While mass production for daily goods was moving forward, one-off pieces were also being produced by master potters. These special pieces were actively produced in the late Edo period (Bakumatsu period 1853-1867) in each village, many of which have been passed down. In the middle of the Edo period, there were new developments in response to a stagnant market, and many functional household items such as hibachi (braziers), bingake (instruments used in tea ceremony), and lighting fixtures were produced. 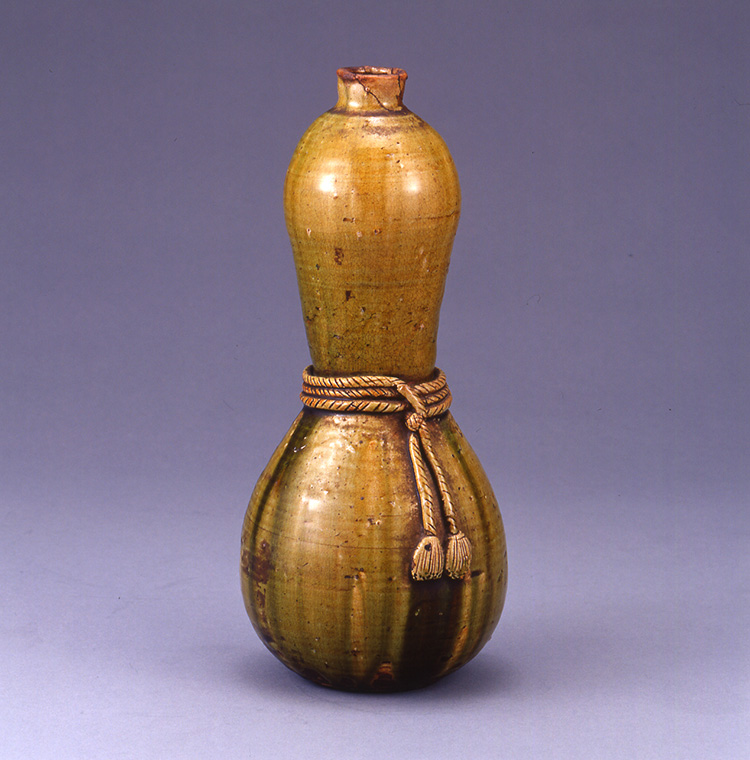 The strong force of production for porcelain began in the late Edo period. The kind of pottery that was in the mainstream market was Hongyoyaki, and the new kind of porcelain pottery was referred to as Sometsukeyaki or Shinseiyaki. Traditionally, pottery making was only allowed by the eldest son, but with the new Shinseiyaki, it was possible for any son to be part of the process, and this accessibility gave strength to surpass the traditional Hongyoyaki production. With Seto's porcelain making, gosu (smalt) pigment dyeing became central. With the guidance of Yokoi Kinkoku (Nanga and Japanese painter and cultural writer), the Seto dyeing style became established. Tamikichi Kato and the Kichiemon brothers, Kato Chuji, Kawamoto Jihyoe (second and third generation), Kawamoto Hansuke (fourth generation) are some of the notorious creators of the time. 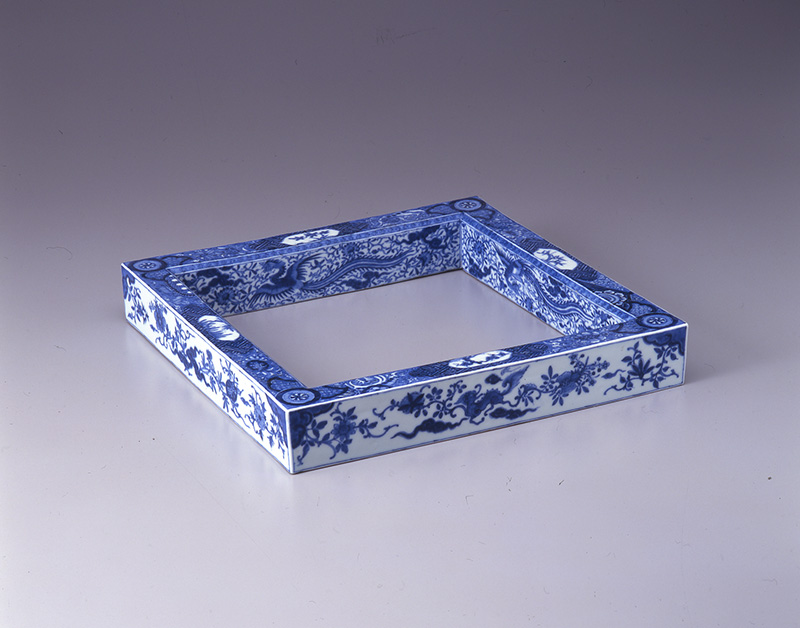 The establishment of Seto ware

From mid to late Meiji era(Meiji era:1868-1912), the infrastructure of what became the foundation of Seto ceramics, came into play with the introduction of new machinery and electricity. The changes in pottery making were most evident in the pottery wheel (rokuro), which changed from being run manually to being machine-run. The kilns, which were once fired with wood, moved on to coal and oil. The framework and infrastructure for mass production was soon established to produce sanitary ware, insulators, physicochemical supplies, architectural ceramics, and novelty items. In addition, household items for dinning and cooking, as well as accessory items were produced. “Touto Seto (The City of Pottery)” was established with the expansion of a railway system as were pottery schools and ceramic laboratories. 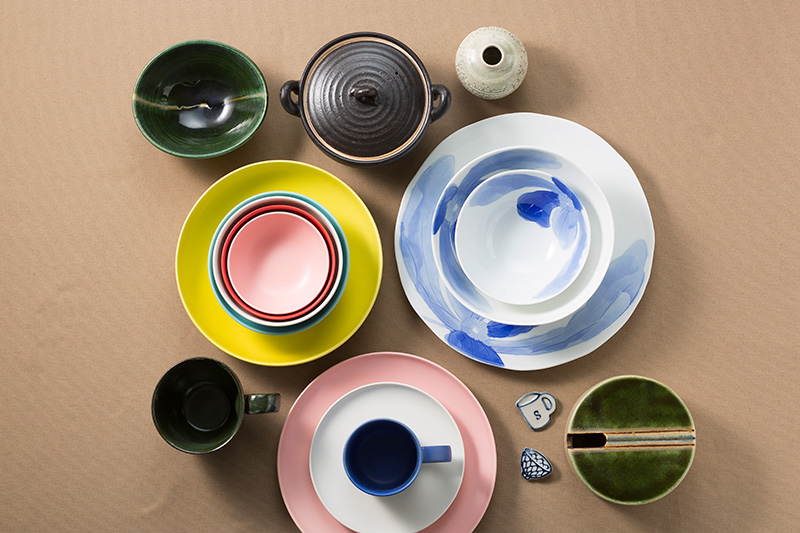 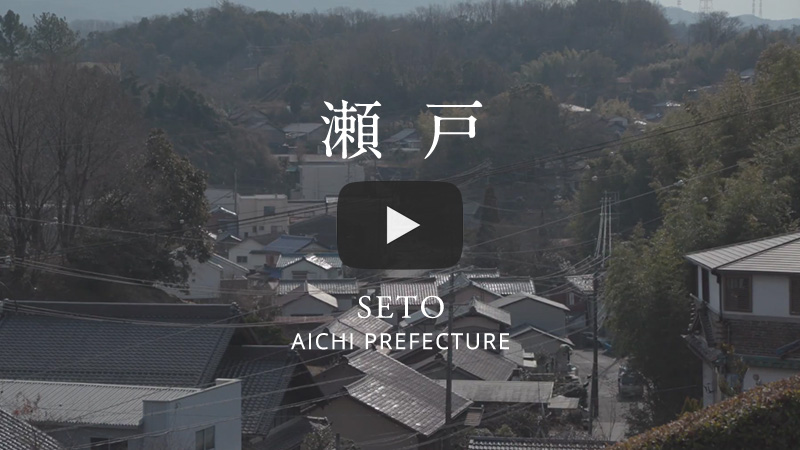 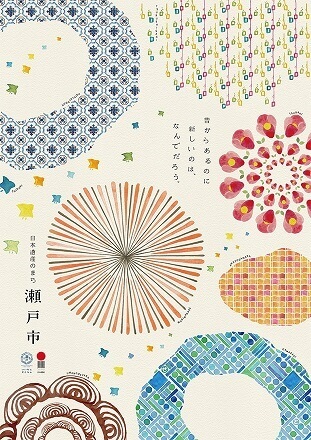 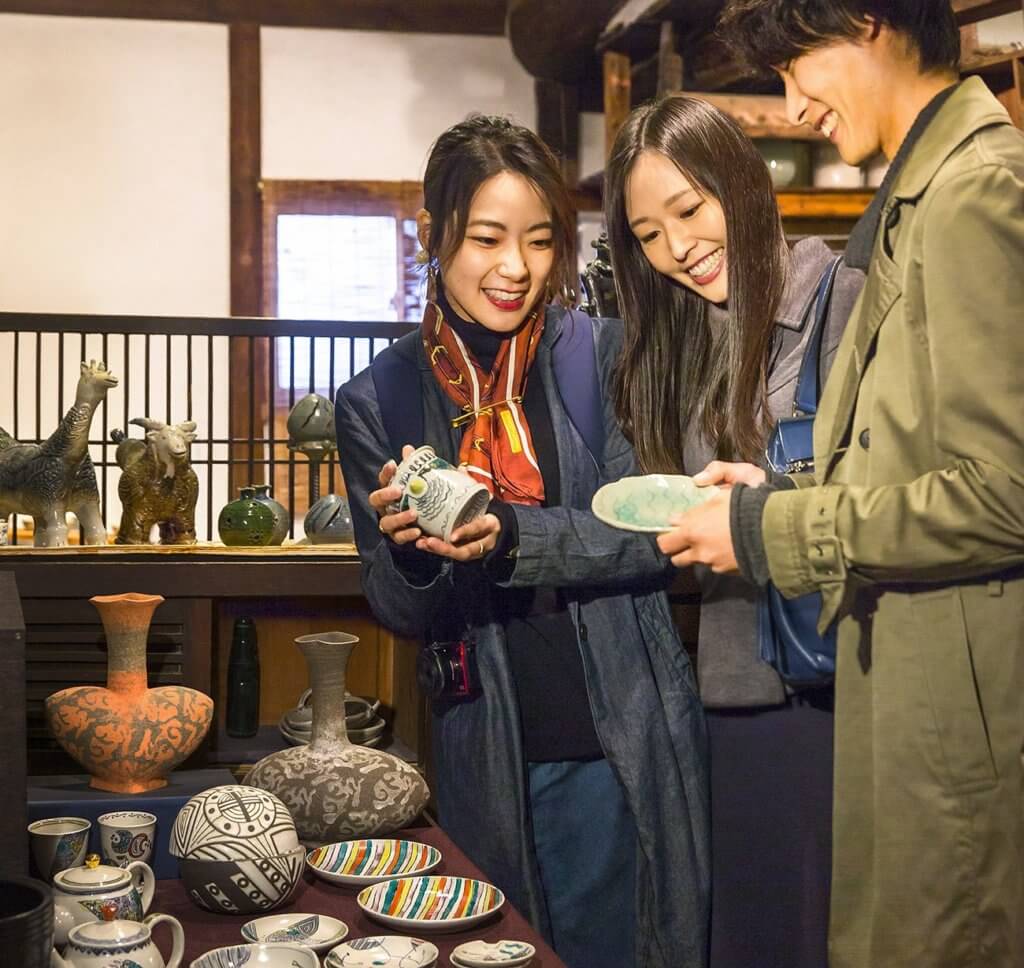 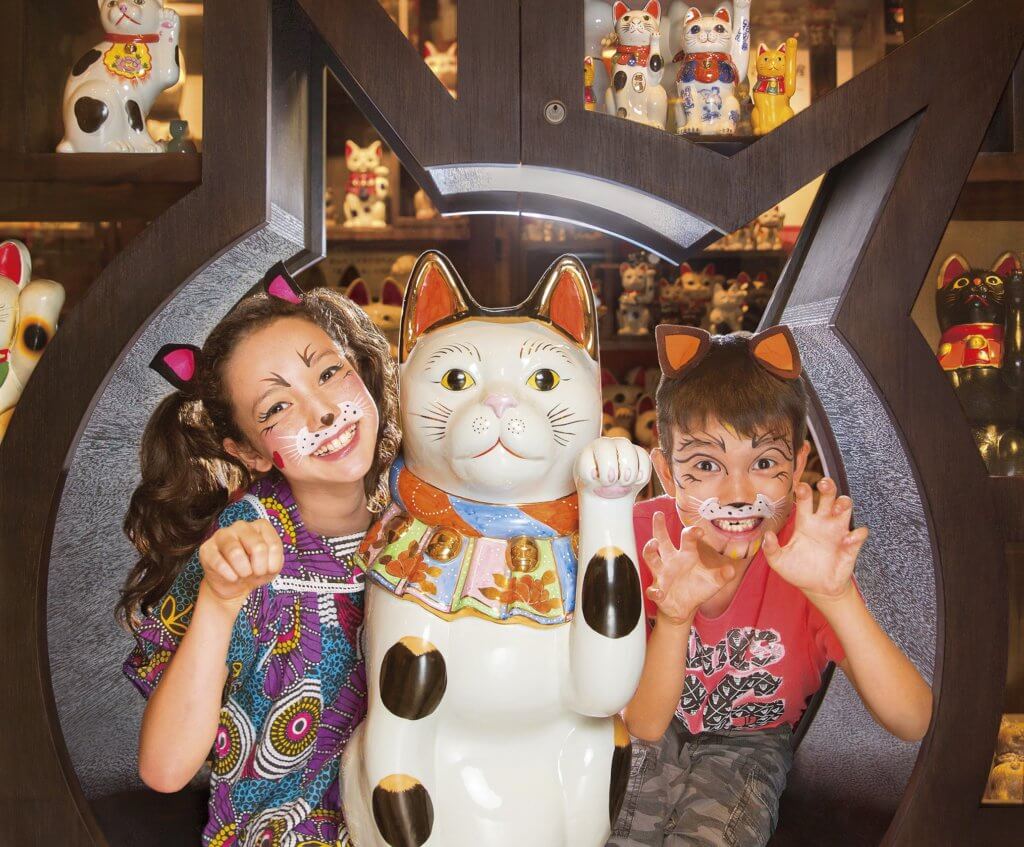 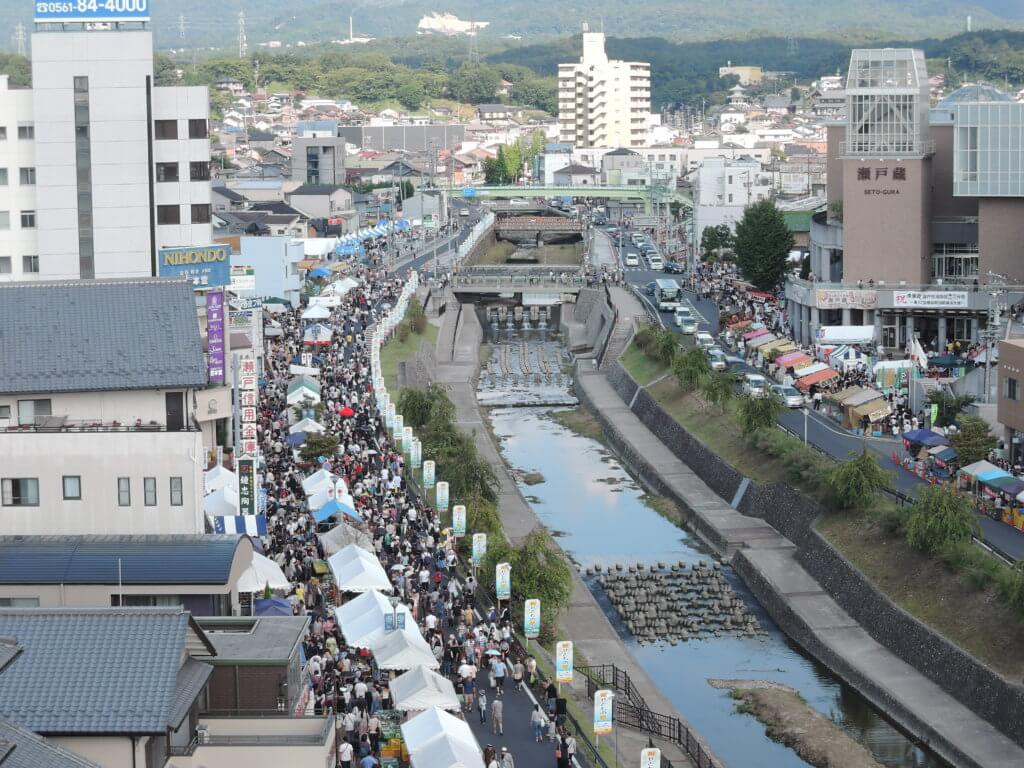