Area: 481.62km²
Total population: 91,306 * As of February 2017
Climate: average temperature 12.3℃, annual precipitation 1,723 mm * 2017 data
Local specialities: Pottery industry, medicine, Asamiya tea, Tsuchiyama tea.
Number of Pottery establishments: 79, Number of people employed: 486 * 2016 data
(Number of business establishments in December 1992: 135, Number of people employed: 1303)
Koka used to be written as "鹿深" or "甲可", both pronounced as "Kafuka" in the Nara period.
The city's name "Shigaraki" was already existed at the same time as the name was written
in the “Shosoin monjo", the old documentation from the Nara period.
The city has been written as “Shigaraki” in the “Shosoinmonjo" document.
It is said that Koka is also said to be the birthplace of ninjas. Introduction Video

Born from the beauty of Lake Biwa

Koka City is the birthplace of Shigaraki pottery,located in the southern part of Shiga. It has am important transportation hub as it is less than 100 km from Osaka and Nagoya,and water source of Lake Biwa In the 13th century, kilns ware built under the influence of Tokoname. The foundation of Shigaraki pottery is granite rocks that spread across the mountains about 65 million years ago. Then, around 4 million years ago, it is said that there was an old lake near the present area of Iga City, which, in the span of 400,000 years became what we know today as Lake Biwa. At the bottom of this Paleo-Lake Biwa Formation are animal and plant remnants along with granite and rhyolite, which have all accumulated to produce the quality clay that was found and used in the city’s pottery. Shiga is also known for its land to be surrounded by mountains on all sides. By traveling over the mountains, the pottery was transported to neighboring cities such as Uji, Osaka, and Iga. In the 16th century, Kyoto was known as the closest and largest city with a high rate of consumption, and Shigaraki took advantage of this opportunity to transport and sell its pottery. During the Sengoku period (1467-1568), not only were tools for tea ceremonies being produced but also tiles, flower pots, raccoon dog figurines, and almost anything imaginable was being produced. It was a strong-willed production area where tradition and culture worked hand in hand and worked to the motto “Anything that can be shaped, can be created”and produced products tailored to the needs of its consumers. 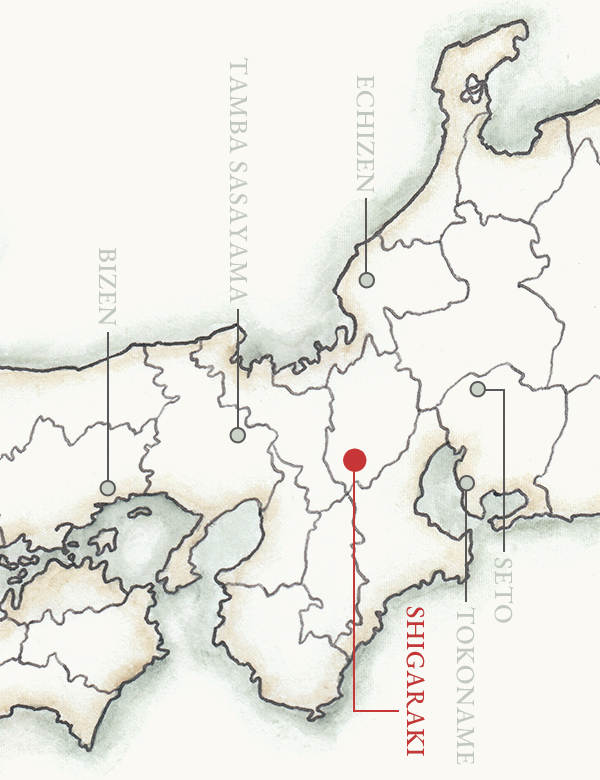 As the pottery is fired without a glaze, major characteristics include a rough texture given by the mixutre of feldspar and quartz sand grains, and a striking variation in texture that is revealed during the firing process. The soil collected from the Paleo-Lake Biwa Formation is highly fire resistant and versatile, suitable for tiles to large pots. In the 1970s, many new potters appeared with the guidance of Rakusai Takahashi the 3rd and Naokata Ueda the 4th, who worked on reproducing the Old Shigaraki pottery processes. Since the late 1980's, many potters who have inherited traditional techniques have been producing freely-shaped works that have been classified as contemporary art.

Strong-willed and Open to Producing Anything and Everything

Various products such as large pots and jars, Buddhist ritual tools, green tea items, raccoon and zodiac figurines were created. During the Warring States period, Shigaraki tea pottery had a reputation in the tea ceremony community. From the Middle Ages to the present day, Shigaraki has been catching the needs of its consumers and has set out to make everything from household items to industrial products. Currently they create with items such as tiles for architecture to home bath tubs the craftsmanship passed on from the past. Items for tea ceremonies and works of art are still being created today. As a part of his famous "Tower of Sun" art installement, renown artist, Taro Okamoto created a relief entitled “The Black Sun” in Shigaraki. 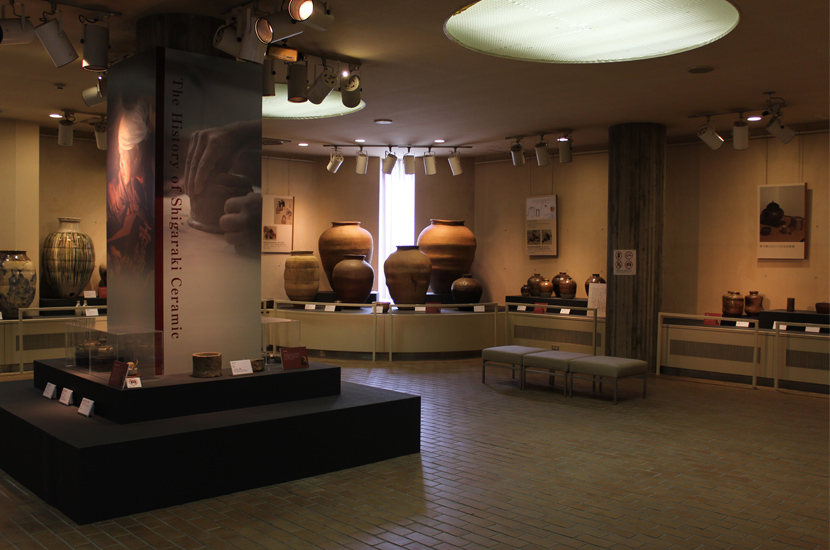 Shigaraki is located close to Osaka and Kyoto, both known to be a highly consumer-centric areas. Although the range of distribution of Shigaraki ware was limited to South Omi(Shiga), Iga, North Yamato(Nara), and South Yamashiro(Kyoto) in its early stages, by the latter half of the 15th century to the 16th century, distribution centered around Kyoto. When Shigaraki was known for its items for tea ceremonies, practitioners in Nara, Sakai, and Kyoto began to seek out ceramics from the region. During the Edo period(1603-1867), the Koshijiro tea leaves jar was created for the Tokugawa family, and this marked the production of Kyo-yaki-styled, smaller sized pottery, which was supplied in large quantities to Edo castle. 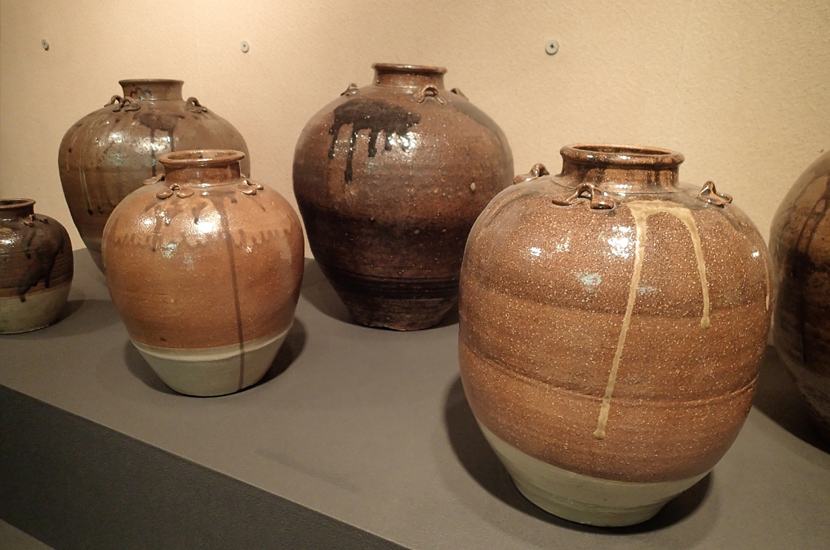 Not only is Shigaraki home to pottery, it is also known for its Green tea. In the beginning of the 15th century Shigaraki pots were often used to hold tea leaves. In the 16th century, Shigaraki ware was praised as equal to highly valued imported Chinese and European tea urns. In the later half of the Tensho era, Katatsuki (a type of tea canister with a top that is square), various water pitchers and flower stands were created upon the request of tea masters and practitioners. In the Edo period(1603-1867), they made tea pots to send tea leaves to the Edo generals, and in the latter half of the Edo period, glazed pottery for tea ceremonies was produced alongside the popularization of the tea ceremony. Thus Shigaraki ware developed in conjunction with the tea culture. 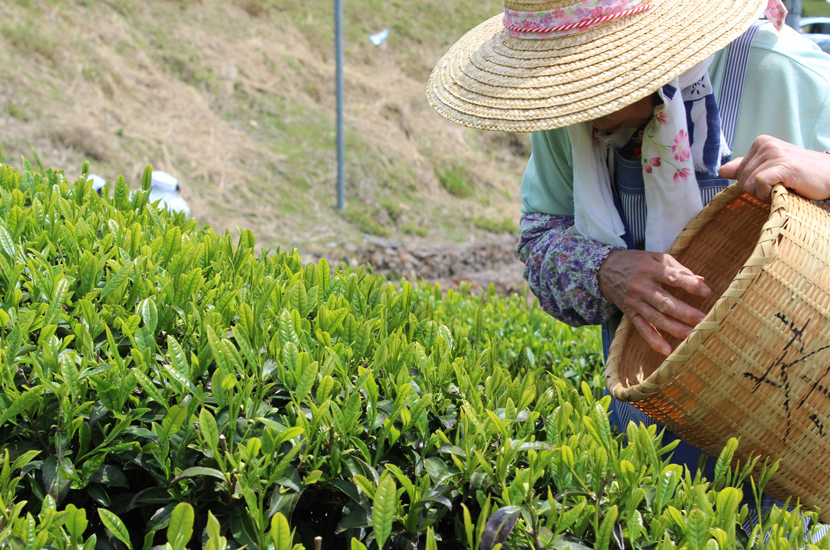 The history of pottery making was established during the Kamakura period (1185-1333), as the craftsmanship of other pottery production areas were passed on. As the identity of Shigaraki ware developed, it was supported by rich quality materials, and Shigaraki products were soon distributed all over Japan. During the Warring States period, they produced tools for tea ceremonies, and during the Edo period (1603-1867), everyday household items were produced. By adapting to different usages at different times, Shigaraki ware stayed relevant and was much loved by many.

The beginning of Shigaraki pottery

Shigaraki ware first started its production due to the technical influence of Tokoname ware. At the beginning of production, the structure of its kilns was similar the "ukama" kilns used for Tokoname ware, and the ceramics that were made were also so similar that they could not be distinguished from Tokoname ware. However, in the 14th century, a unique style of Shigaraki ware established itself. In this period, because of the development of agriculture, three kinds of ceramics produced due to demand. Jars, vessels, and bowls. 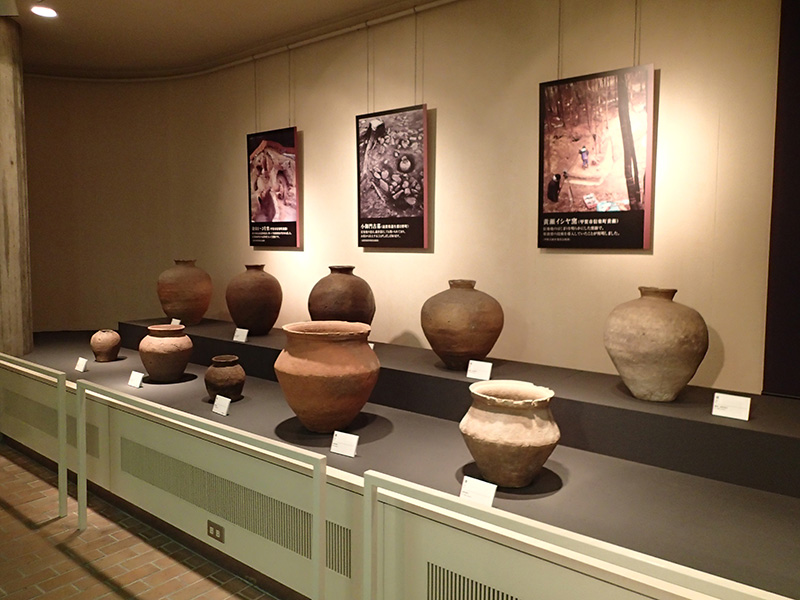 The appeal of the the kiln

Although Shigaraki was strongly influenced by Tokoname ware, in this period it gradually began to have its own unique aesthetic and texture. Shigaraki pottery was unglazed and fired at a high temperature. Its unique characteristic was the rough surface created by the mixture of feldspar and quartz sand grain, and its vitrified natural glaze mixed with its scortched reddish brown surface. In additional, the top shoulder of the pots had a strong lines called,” Higakimon” and “Nawamemon” applied. Furthermore, small pots were named “Uzukumaru” (the Japanese verb for “crouching”), as they looked like a crouching person. 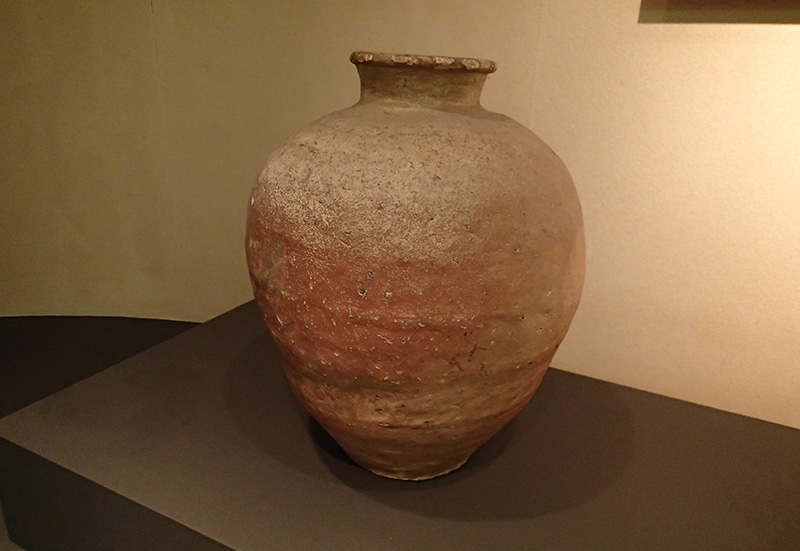 The spread of Shigaraki tea pottery

The simplicity of Shigaraki pottery’s was believed to have complemented the spirit of the tea ceremony. Gradually, the various item used for tea ceremonies were introduced into households.

Murata Jukou, a well-respected and noted tea practitioner in Nara recommended beginners interested in tea to either have Bizen or Shigaraki pottery when practicing tea. This spread to the village people of Nara, Sakai, and Kyoto, and Shigaraki pottery became well-known for its use in tea ceremonies. It is said that Shigaraki pottery was used in tea ceremonies as early as when Bizen ware was. There is also an anecdote left in history which refers to Shigaraki Onioke water pitcher, which Oda Nobutada, Oda Nobunaga’e eldest son has. but the pitcher was last when his father died at Honnoji temple. 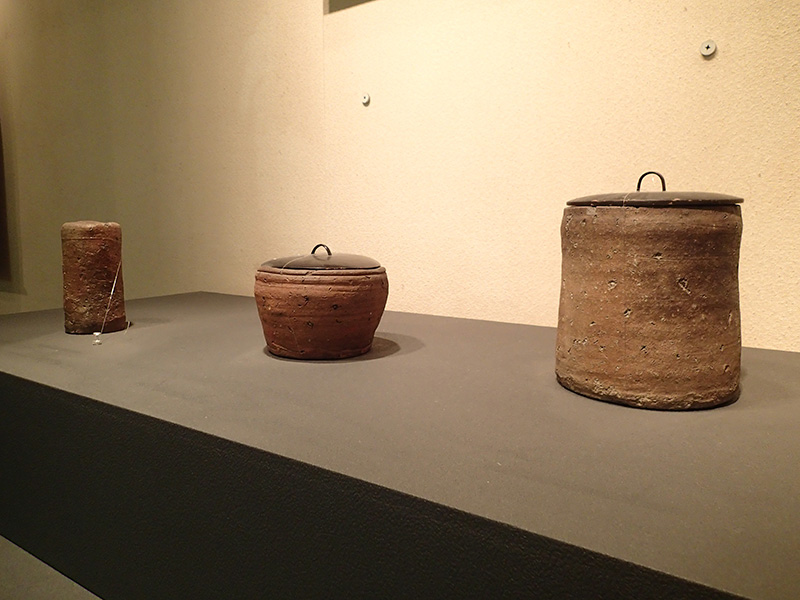 Introduction of the “noborigama” (climbing kiln) and glazed pottery

In the Edo period, mass production became possible with the ascending kilns that were introduced to Shigaraki. In addition, glazing was introduced nationwide and Shigaraki began to create glazed ceramics. In addition to producing Koshijiro teapots for storing Uji tea to be presented to the Edo generals, production of smaller-sized glazed pottery began to meet the needs of a ceramic brand called “Kyo-yaki”. Until then “Kyo-yaki” was known to be expensive and unattainable, but Shigaraki ware was an accessible type of pottery created for the everyday household. 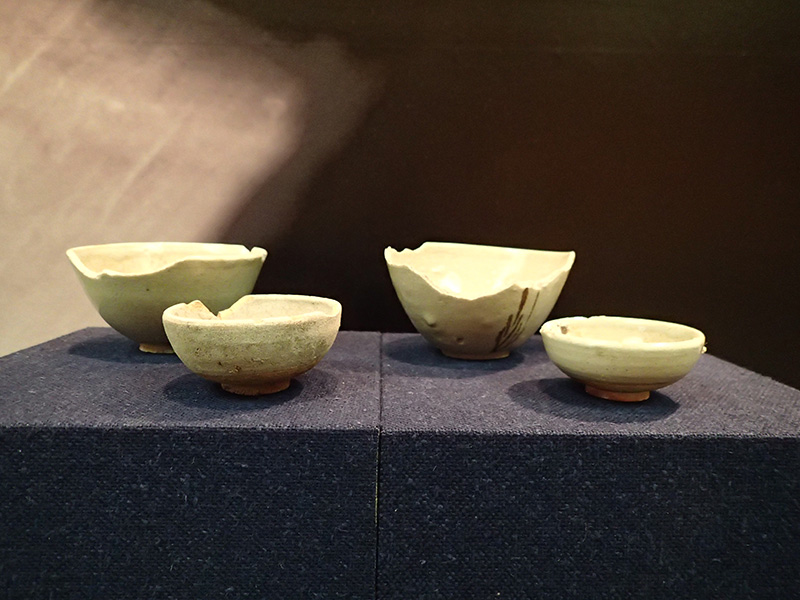 Development and modernization of new products

As the Meiji Restoration period began with the modernization of the nation, new products such as "itotorinabe"(a tool used for boiling cocoons) and acid-resistant ceramics for the chemical industry were produced one after another as industrial goods. Traveling by train became widespread, with “ekiben” (lunch boxes) and “kisha dobin” (teapots used on trains) being made and supplied all over Japan. Braziers were produced in the latter half of the Edo period(Edo period:1603-1867), and gradually increased in production in Shigaraki. It gained popularity for its ability to heat and cool quickly compared to those of other production areas. In 1897 (Meiji 30), Tanii Naokata developed a new process of making glazes based on the Chinese pottery seaweed glaze (namako yu). In 1920 (Taisho 9), Satoshi Ishino’s completion of a new type of potter's wheel made by plaster mold impacted ceramic production on a large scale. 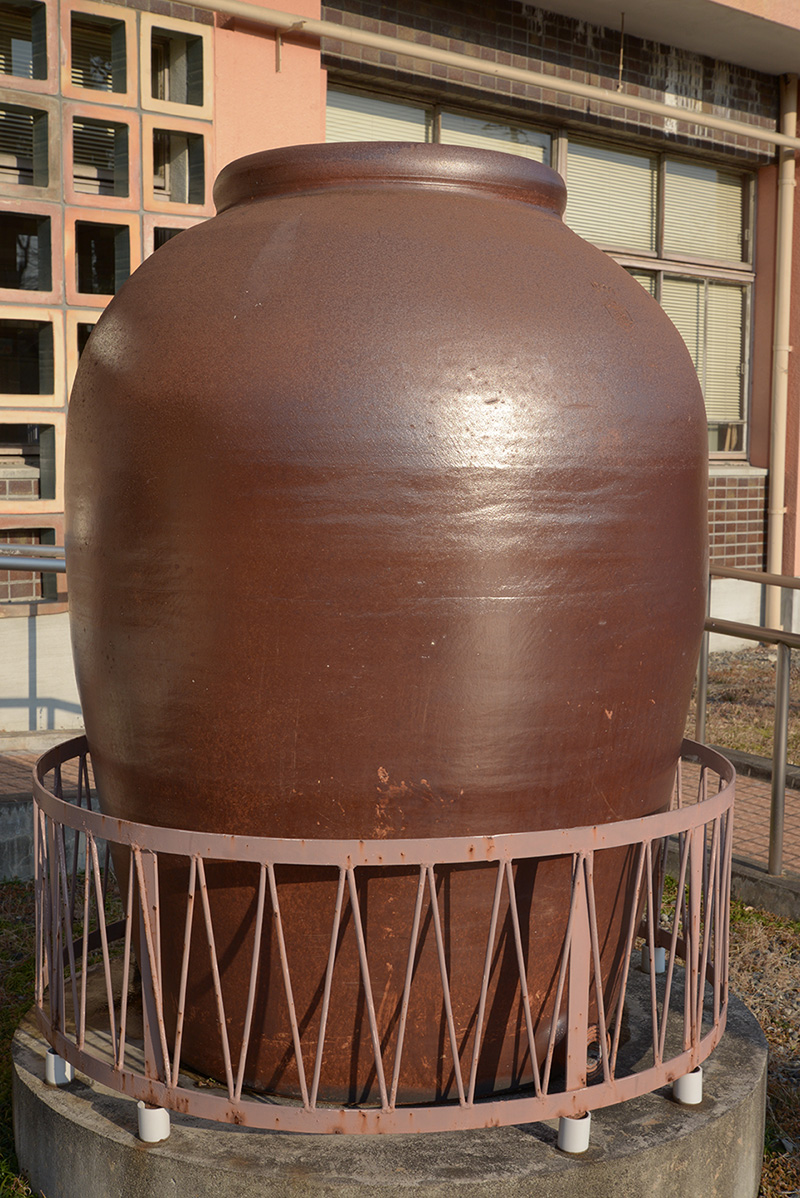 The birth of the Shigaraki Tanuki (Raccoon)

One of the most characteristic products of Shigaraki, the “tanuki” (Japanese raccoons), started in the early Showa era (Showa era: 1926-1989). In 1951(Showa 26), under the emperor’s reign, the hibachi were arranged in an arch with braziers, and the Shigaraki raccoons were set holding the Japanese flag. The emperor was so pleased by this sight that he composed a tanka about it and this news spread all over Japan. Also, Raccoon culture researcher, Ishida Gocho who created “Shigaraki Tanuki Hassou Play” based on historical tradition recommened pottery shops to sell "Tanuki" with bookmarks in Shigaraki. Soon, raccoon figurines began to be favored as lucky objects. 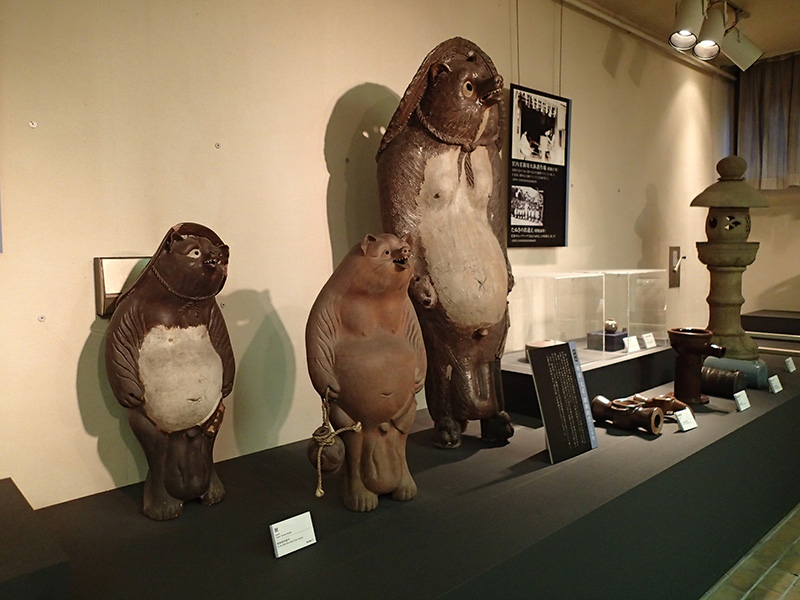 The coexistance of Industrial Production and Art-based Pottery

In the Showa 20’s (1945-1955), Shigaraki was blessed by its “Hibachi Economy” (hibachi is a Japanese heating device designed to hold burning charcoal). By the Showa 30’s (1955-1965) growing plants became on trend and the production shifted to creating flower pots. In the mid-1950s, the production of tiles and building ceramics began. These were used for the roof of the National Assembly building. Bathtubs and gardens, to name a few, were various examples of how ceramics were being created to meet the needs of the times. Besides industrial products, artworks were also produced utilizing Shigaraki’s knowledge and craftsmanship in ceramics. Taro Okamoto created a relief piece called ”Black sun" for the 1970's Japan World Exposition (Osaka World Expo) "Tower of the Sun” in Shigaraki. 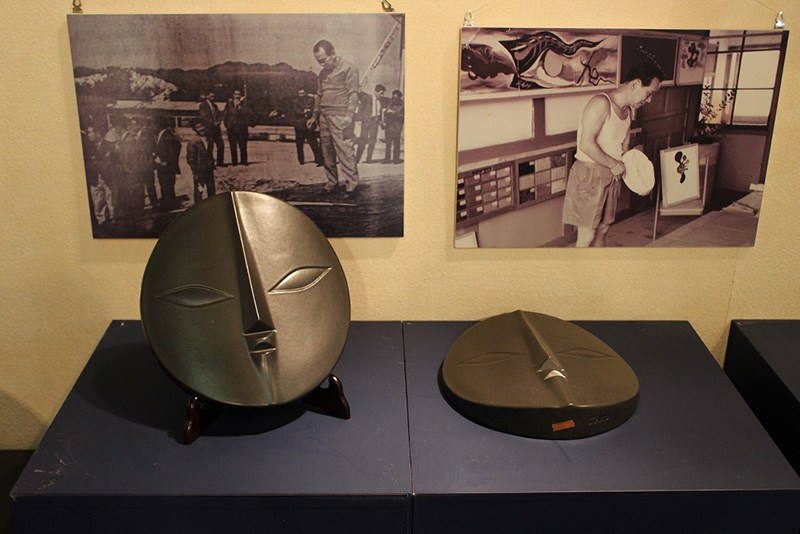 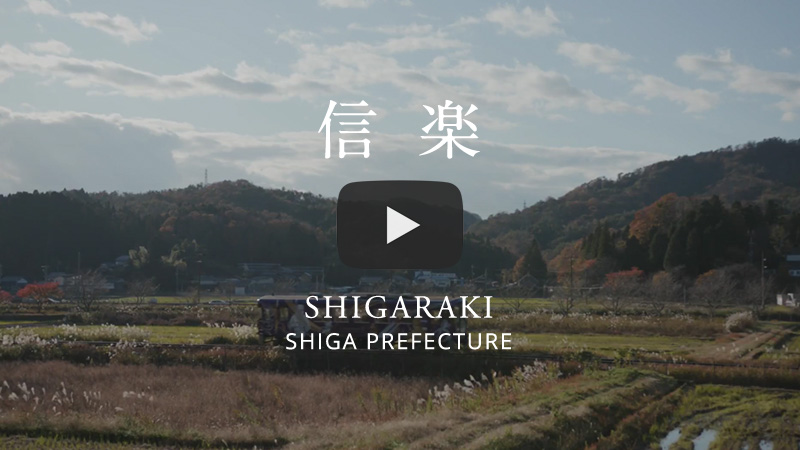 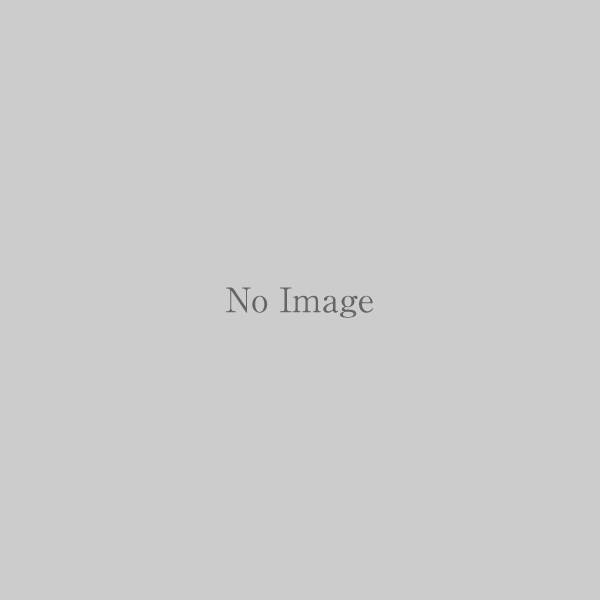 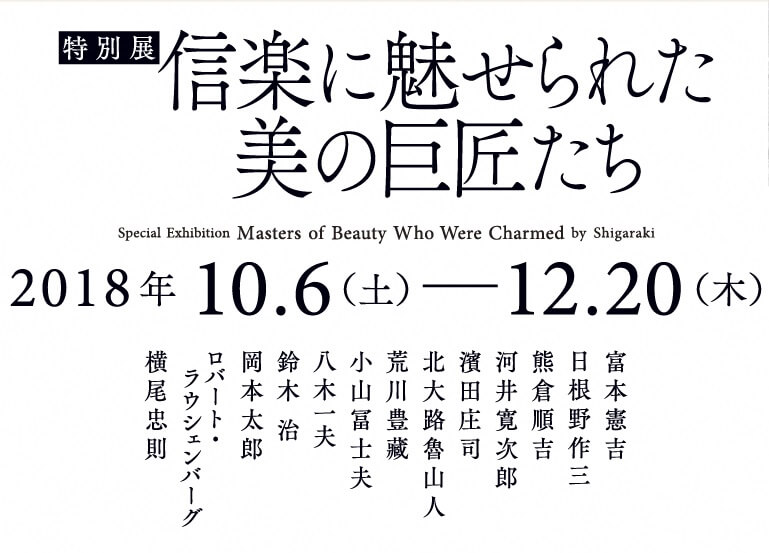 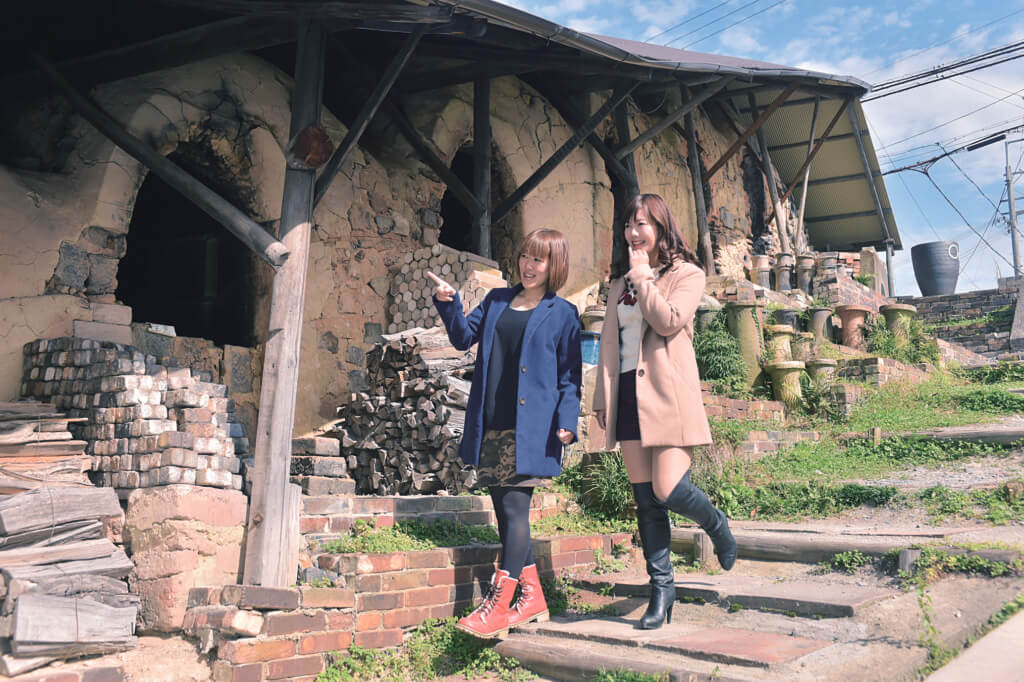 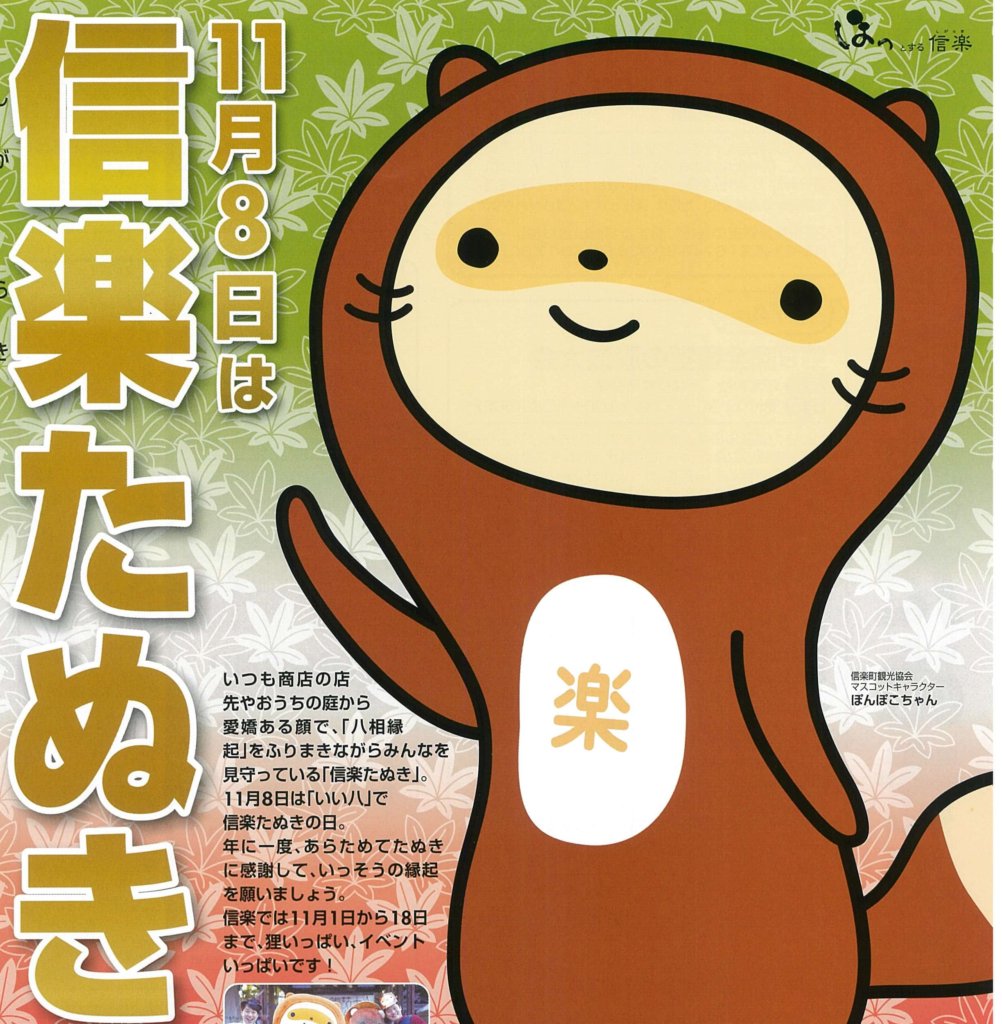