Tambasasayama is the birthplace of "Dekansho-bushi", a traditional folk song. Introduction Video

Tambasasayama is located in close proximity to Kyoto and Osaka, sandwiched between mountains Kokuzosan and Wadenjiyama, along with the Shitodanigawa River. The main kilns were lined up in an area where the fog, which was particular to the Tamba region, would clear up quickly, making it a suitable place for drying pottery. The origin of Tamba ware dates back to the late Heian period(Heian period:794-1185) to the early Kamakura period(Kamakura period:1185-1333). During these times, there was a high demand for everyday items such as pots, urns, and mortars, and anagama (cellar kilns), which were dug into hillsides and covered with roofs, were used to produce such items. At the end of Keicho period(Keicho period:1596-1615), the Korean noborigama (climbing kiln) was introduced, making it possible for a larger number of products to be fired in a short amount of firing time. With new techniques and inventions such as “kerokuro” (a wheel operated by kicking) and "yuyaku"(glazes) made from ash and iron, potters actively began to create household items. In the late Edo period(Edo period:1603-1867), the quality of products improved with the introduction of new glazes and clay. The combining of different types of glazes also created new finishes and patterns, and many new products were produced.

In the Showa 20's(1945-1955), new products such as "kisha-chabin" (tea canteens mainly used in train carriages) and blocks were created. In the Showa 40's (1965-1975), on the other hand, the folk craft output in this region skyrocketed due to encouragement from pottery instructors and folk craft movement activists. Tamba ware is still relevant in today's society, producing daily items while maintaining its tradition. 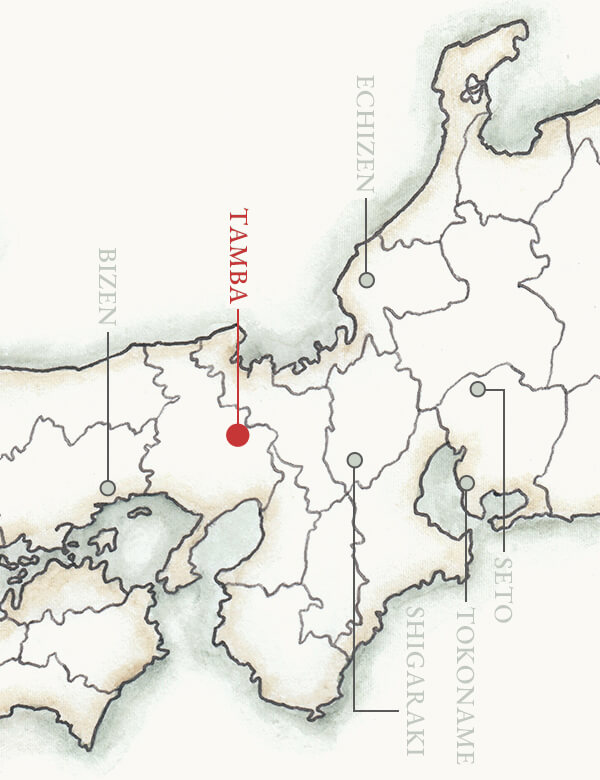 Tamba ware has never been confined to a particular technique or process, rather, it has been flexible to the demands of the times, making relevant household items. Although equipped with the same type of anagama (cellar kilns) as Tokoname and Echizen, what makes Tamba ware unique is its outstanding finish, with a bright natural glaze made from ash applied when firing. In addition to the already existing glazes made from straw and chestnut shell’s ashes, wood ash glaze was invented and mainly used when the "noborigama" climbing kiln was first introduced. Those ashes are still the main ingredient of glazes being used today, however, other types such as soil, iron, and white glazes are also used. With the advent of “noborigama” (climbing kiln), "kerokuro," a rare type of kicking wheel which rotates in a counterclockwise direction, was also introduced, and these inventions have been passed down to the present day.

Continuing its production and staying relevant

Tamba ware was heavily influenced by the Tokoname ware in its early stages. Until the Muromachi period(1336-1573), most of the pottery had a round body and ruffled rim, but in the late Muromachi period, this changed to the “Tamabuchi” style, which was less prone to damages, and daily household pottery such as tableware and “tokkuri” (sake bottles) were produced. With the spread of porcelain, pottery production of such items declined, and a wide range of items including acid-resistant bottles and gardening products were produced. Aligned with the demands of the times, Tamba ware has created products that are relevant and very much rooted in the lives of the ages. 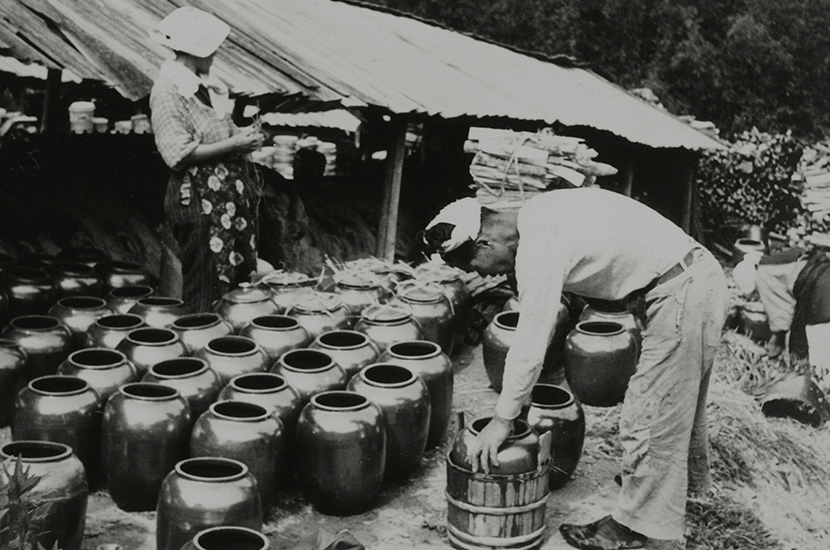 Making products that are relevant to the Japanese lifestyle

For a while post world war two, the demand for pots, urns, and mortars grew steadily due to a lack of household items, but eventually the market became saturated. Soon after, the mechanical Rokuro (potter's wheel) was introduced, and pre-war industrial items such as acid-resistant bottles and clay pipes, kisha-chabin (tea canteens mainly used in train carriages), large bowls, blocks, roof tiles, and barrels were mass produced, changing the image of traditional Tamba ware. Today, Tamba ware incorporates new innovations to match contemporary lifestyles while maintaining its tradition of producing folk craft articles such as tableware and flower vases. 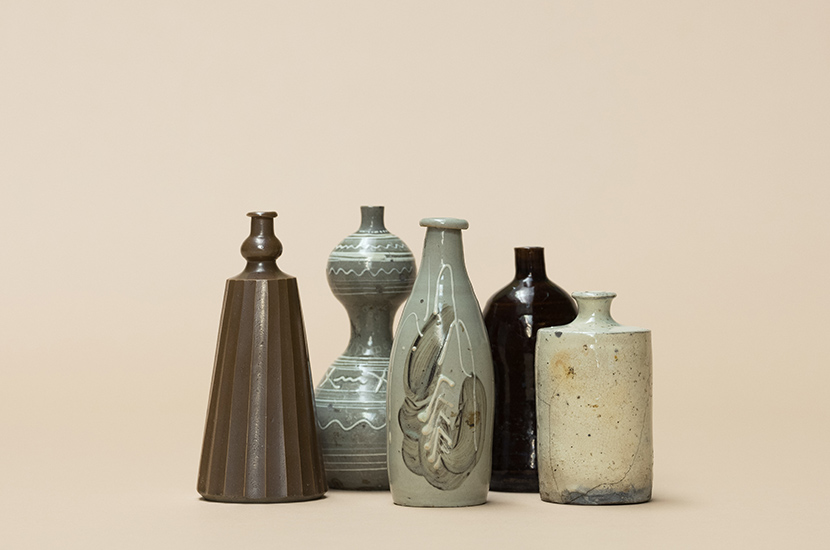 Exported to large-scale consumption areas such as Kyoto, Osaka, and Edo

During the Edo period(1603-1867), bright red Tamba tea pots were highly sought after, and along with mortars, they were exported in large quantity to Kyoto, Osaka, and Edo. Delivery and distribution was initially monopolized by "Kamaza" or an early modern pottery association consisted of merchants and traders established in 1654 (Jouo 3). Later, the Sasayama clan controlled the market, and eventually led to the spread of Tamba ware across the country. Owing to the traditional techniques and kiln sites being passed down through the ages, Tamba ware received high acclaim from Yanagi Soetsu, a Japanese philosopher, and Bernard Leach, an eminent studio potter, as fine arts and crafts in 1920s. 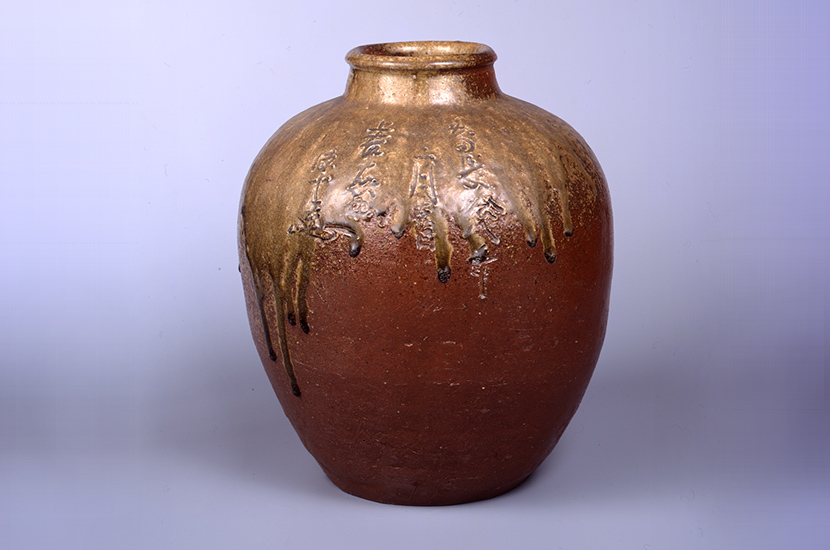 Tamba ware waned at one point, however, made a comeback owing to the praises from eminent potters such as Kawai Kanjiro and Bernard Leech. Today, approximately 60 kiln sites are being active, and some of which are vigorously operated by young studio potters.

From the abandoned area of the "Sanbontouge-kita" kiln site in Konda-cho, old painted pots and urns were unearthed. It is believed that the Heian period was when Tamba ware was born. 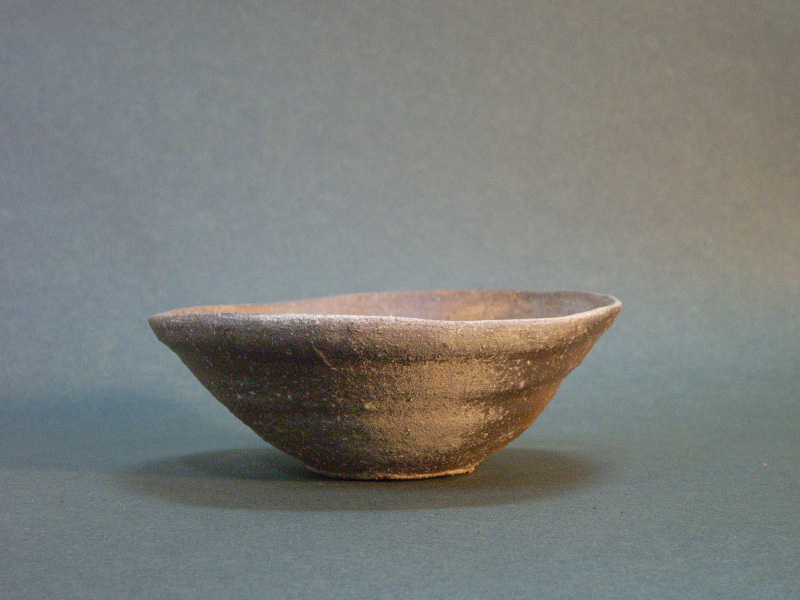 Tamba ware made in the anagama (cellar kilns)

Until the Edo period, firing was done in the anagama (cellar kilns), which were made by digging holes into mountainsides. Gathering materials such as soil and fuel was made easier with the anagama (cellar kilns), as these materials could be found on the mountain slopes where the kilns were made. By the Kamakura to the Muromachi period, large items such as water pots, oil urns, and seeds urns were made using the Himotsuchimaki (coiling) technique. 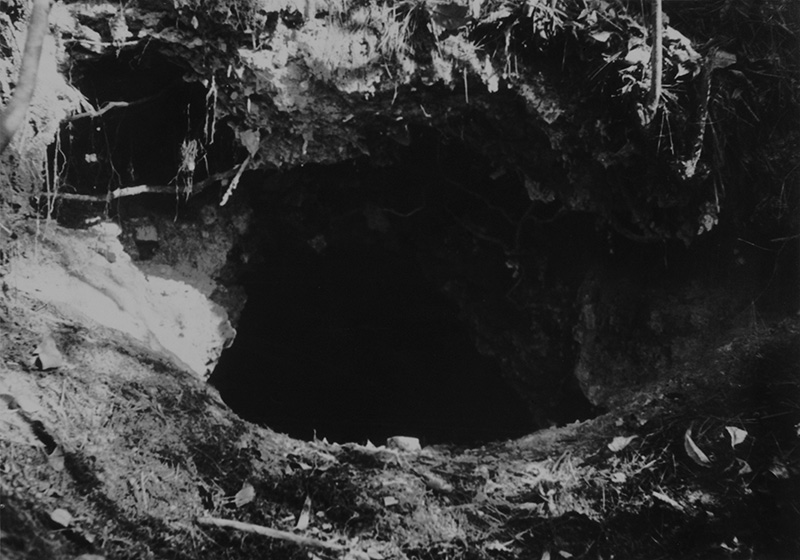 The “noborigama” climbing kiln was introduced to Japan from Korea in 1592 (Keicho 16). This kiln was able to fire a large quantity of products at the same time. Around the same time the “keri rokuro” (kicking wheel) was popularized, allowing Tamba ware to be mass produced. This marked a revolutionary turning point for Tamba ware. 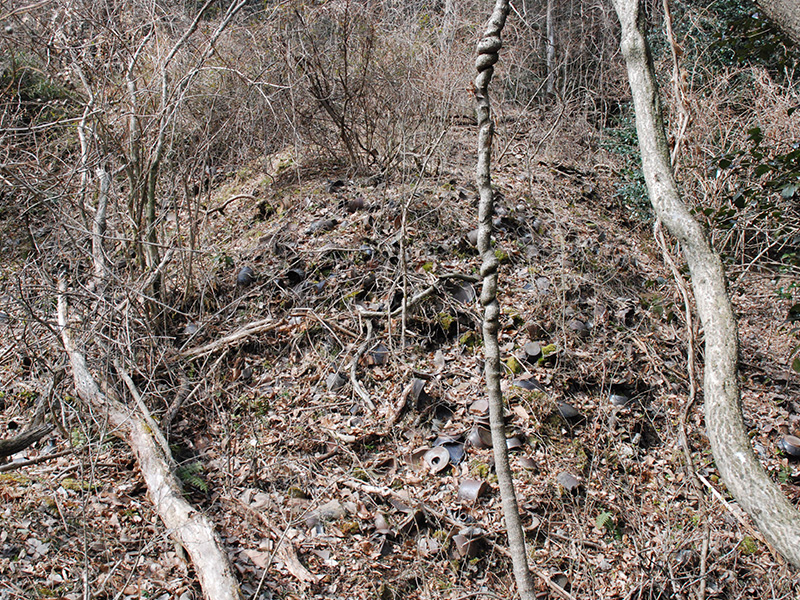 A variety of products. Diverse craftsmanship.

Through the advancement of new techniques, this era saw an enhanced quality and variety in Tamba ware, which was different from what it used to be in the Middle Ages. There were growing trends toward diversification, and products such as "Sansho" (Japanese pepper) pots, tea ware, and tokkuri (sake bottles) were created. This led to the birth of new glazes and techniques. The Sasayama Domain, which attempted to gain profit from selling Tamba ware, gave special privileges to an Osaka merchant to establish a "Kamaza" association in order to exclusively manage and sell the pottery products. 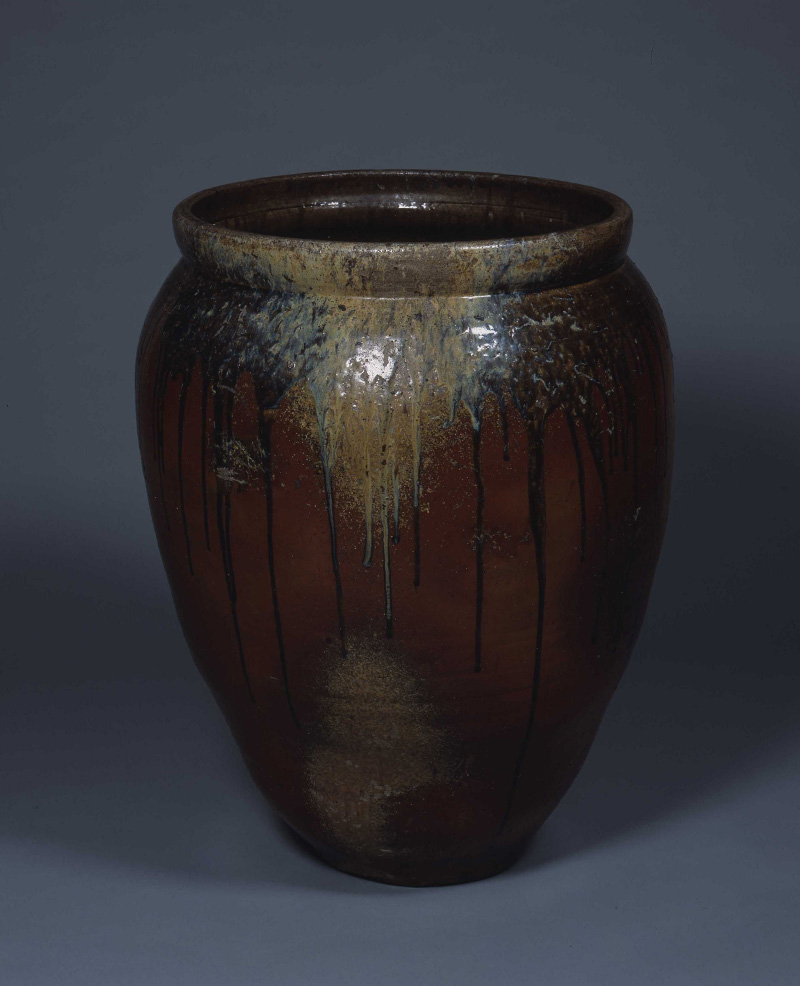 Responding to the demands of the times

The arrival of the railway and the advancement of truck transportation allowed Tamba ware to be distributed in the entire Kansai area. The major products being produced at this time were large-sized sake and soy sauce bottles. During the Taisho era, medium-sized sake bottles were produced ; and in the Showa era, flower pots and other necessary items were produced to meet the needs of the times. During the Second Sino-Japanese War which began in 1937 (Showa 12), a wartime atmosphere blanketed over the Tamba region, and sulfate bottles were mass produced. During the World War II, the "Settan-heikiseisakusyo" (an arsenal) was built, and ammunition cartridges
were manufactured here. 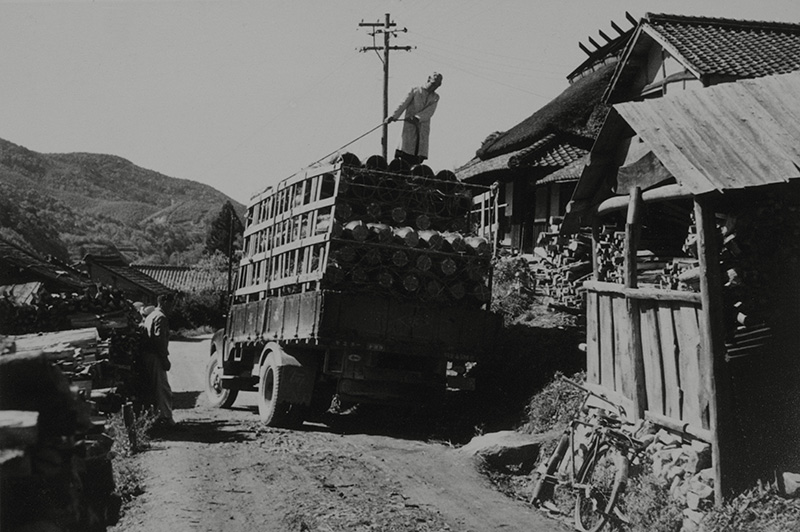 Due to the lack of household items after the war, the production of urns, pots, and bowls grew steadily. In addition, the beauty of Tamba ware rose to prominence during the folk art movement started from the early Showa era. After the war, Tamba ware was highly praised by eminent potters such as Hamada Shoji, Kawai Kanjiro, and Bernard Leech; and started to be globally recognized. In 1958(Showa 33), a hibachi created by Hiroyuki Ichino won the Grand Prix Award within the ceramics department of the Brussels World Fair, also known as Expo 58, gaining the world-wide recognition. 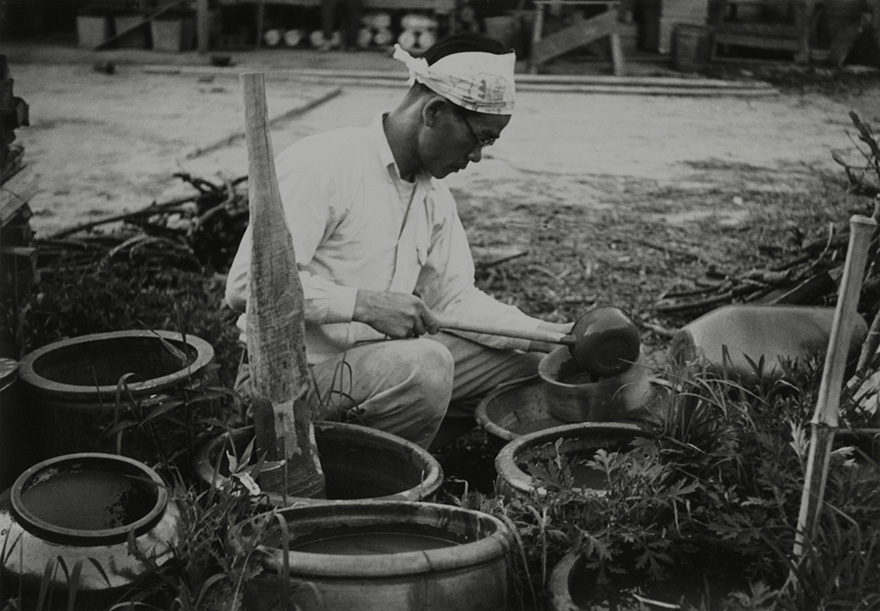 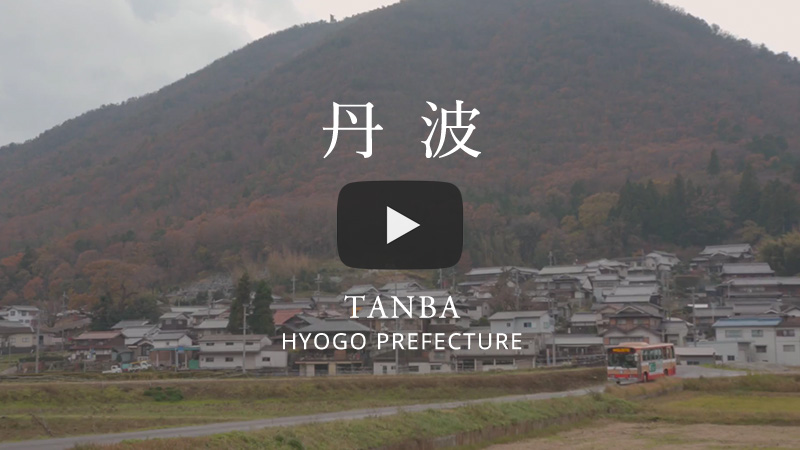